Rear-projection is an obsolete technology used in what was once called “big screen TV”. This Pioneer unit was beginning to show its age: 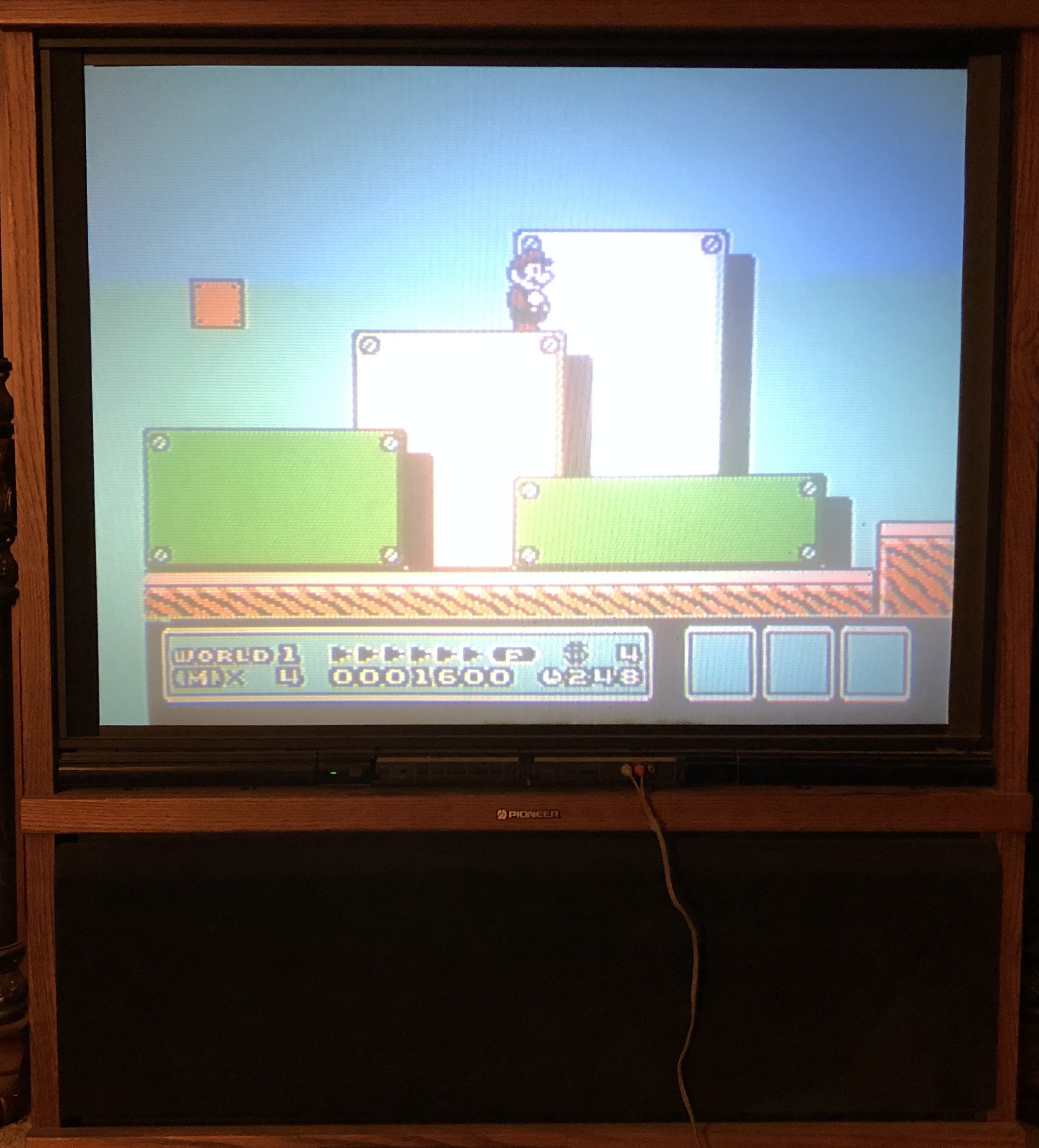 It is a Pioneer SD-P453S Projection Monitor Receiver, according to the label: 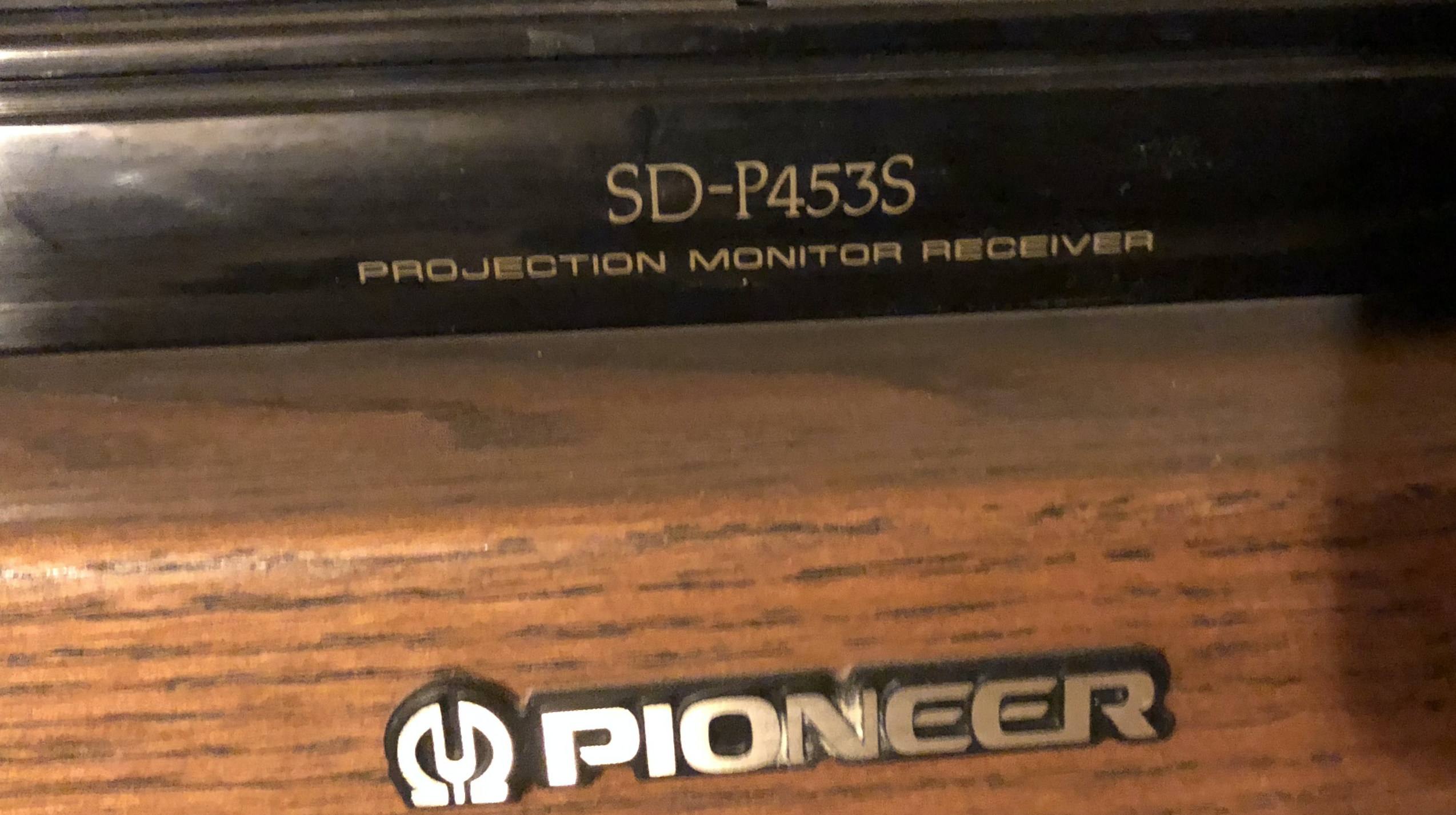 Found the manual: Pioneer SD-P503FP Operating Instructions Manual includes SD-P453FP-Q, and starting on page 27, the SD-P453S. The “S” model adds surround sound. Not many technical details in the operating manual, but it includes a block diagram: 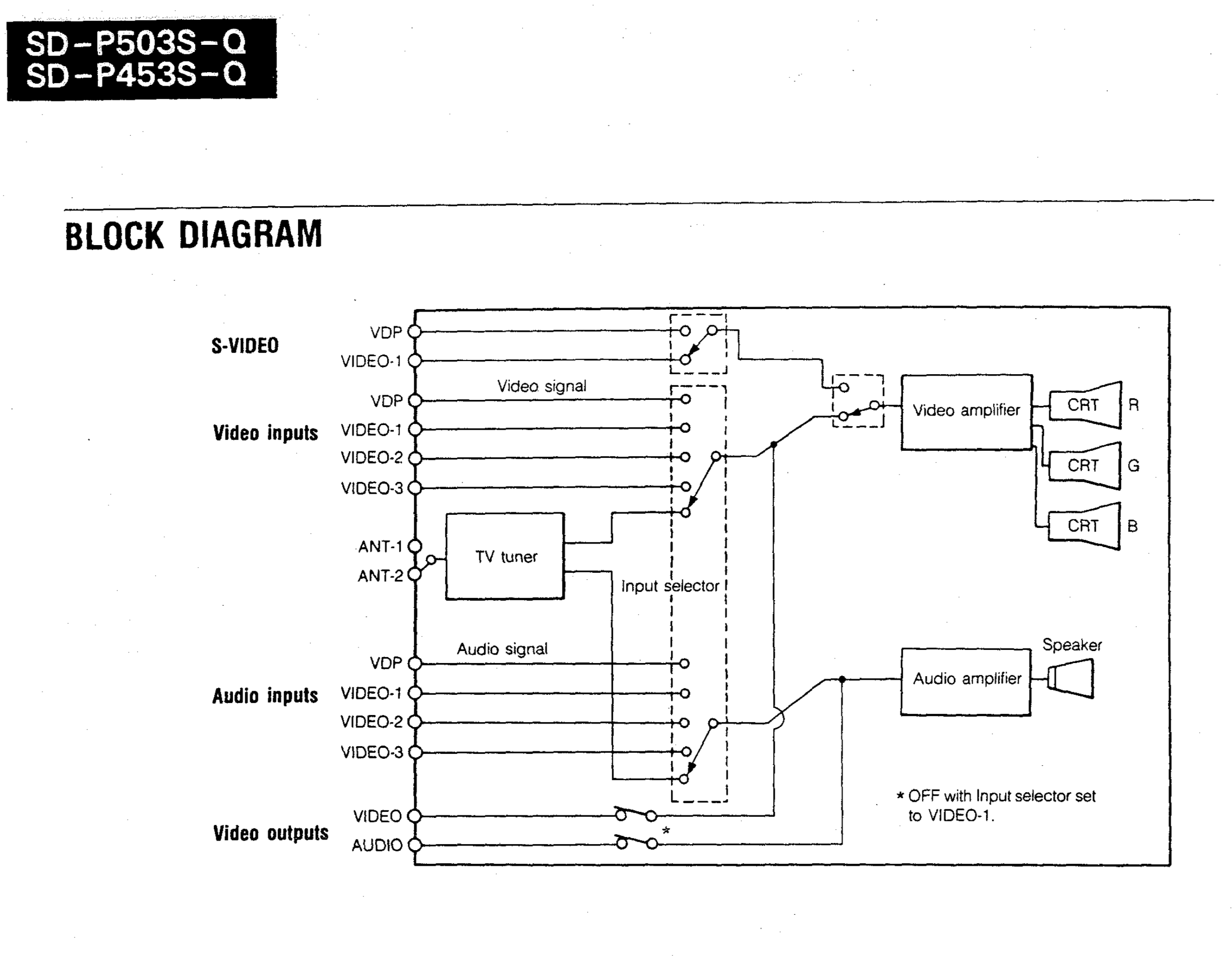 Someone is selling the SD-P453S-Q service manual for $7.99. And another for $4.99, 134 pages Order No. ARP1869 (printed July 1989) for SDP503PQD and related models. I’ll pass, but the preview has this useful diagram on the high voltage generation point, documenting the VR1 ACX1025 variable focus resistor, CRT assemblies, and deflection yokes: 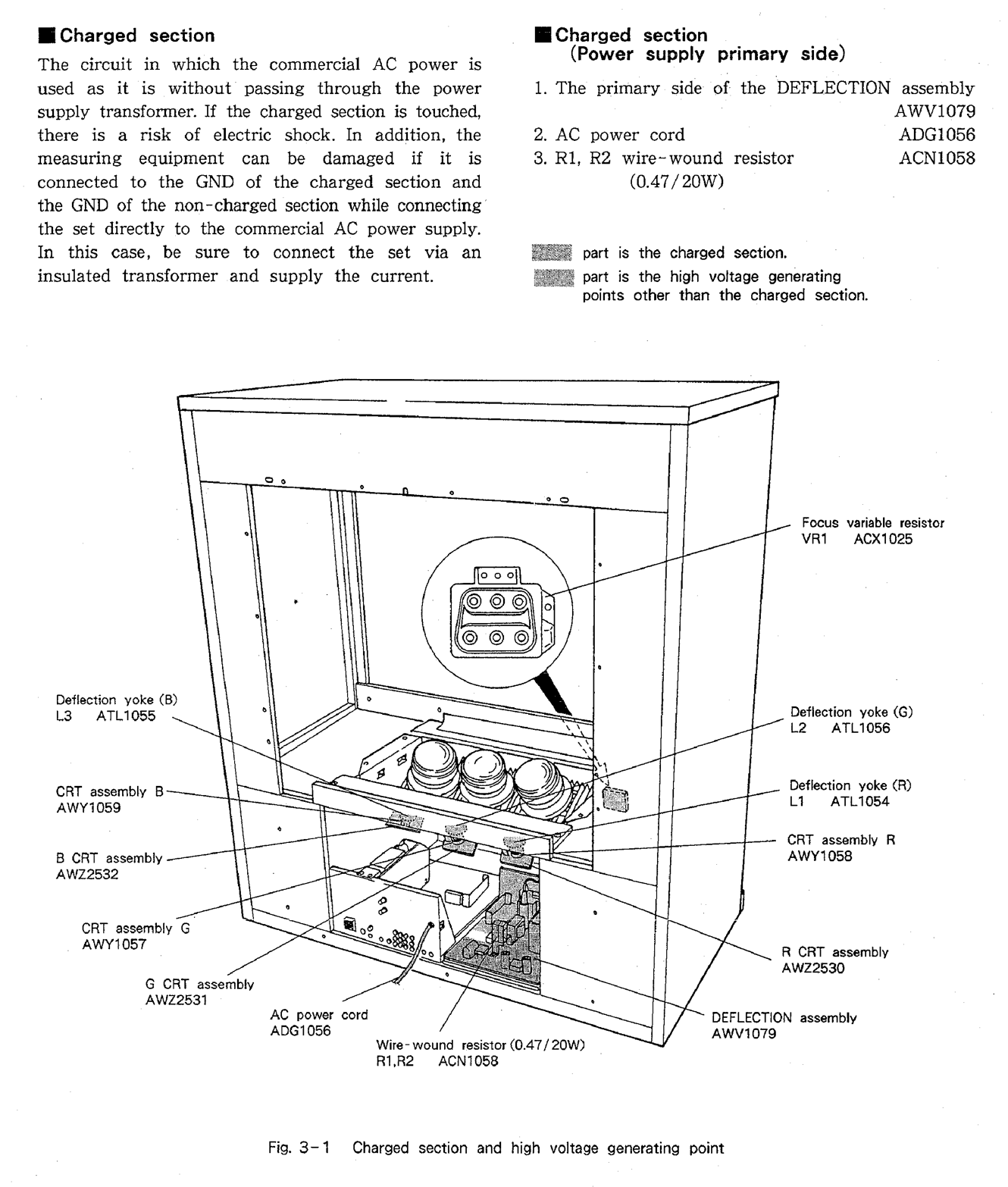 Starting with the back panel: 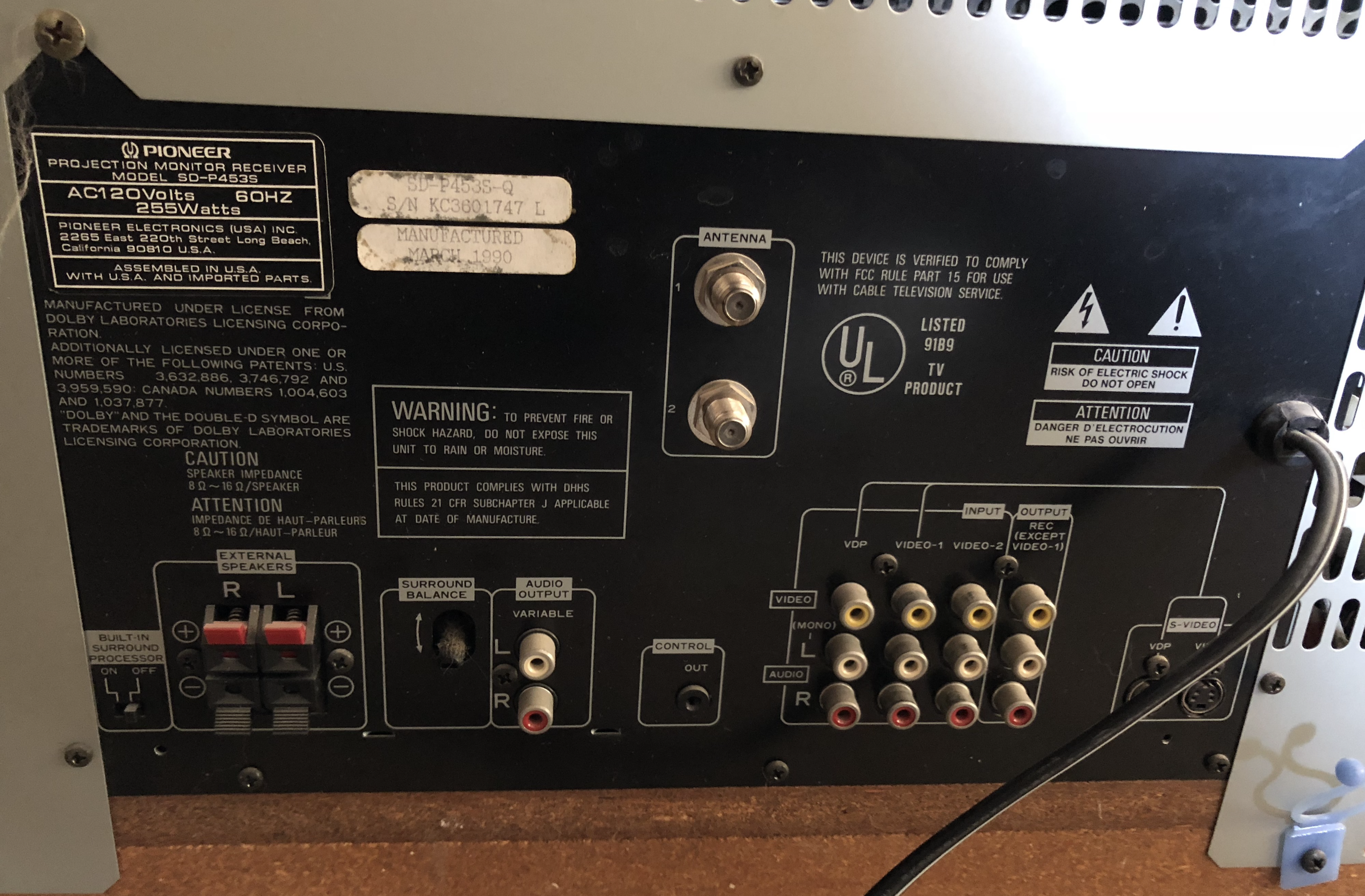 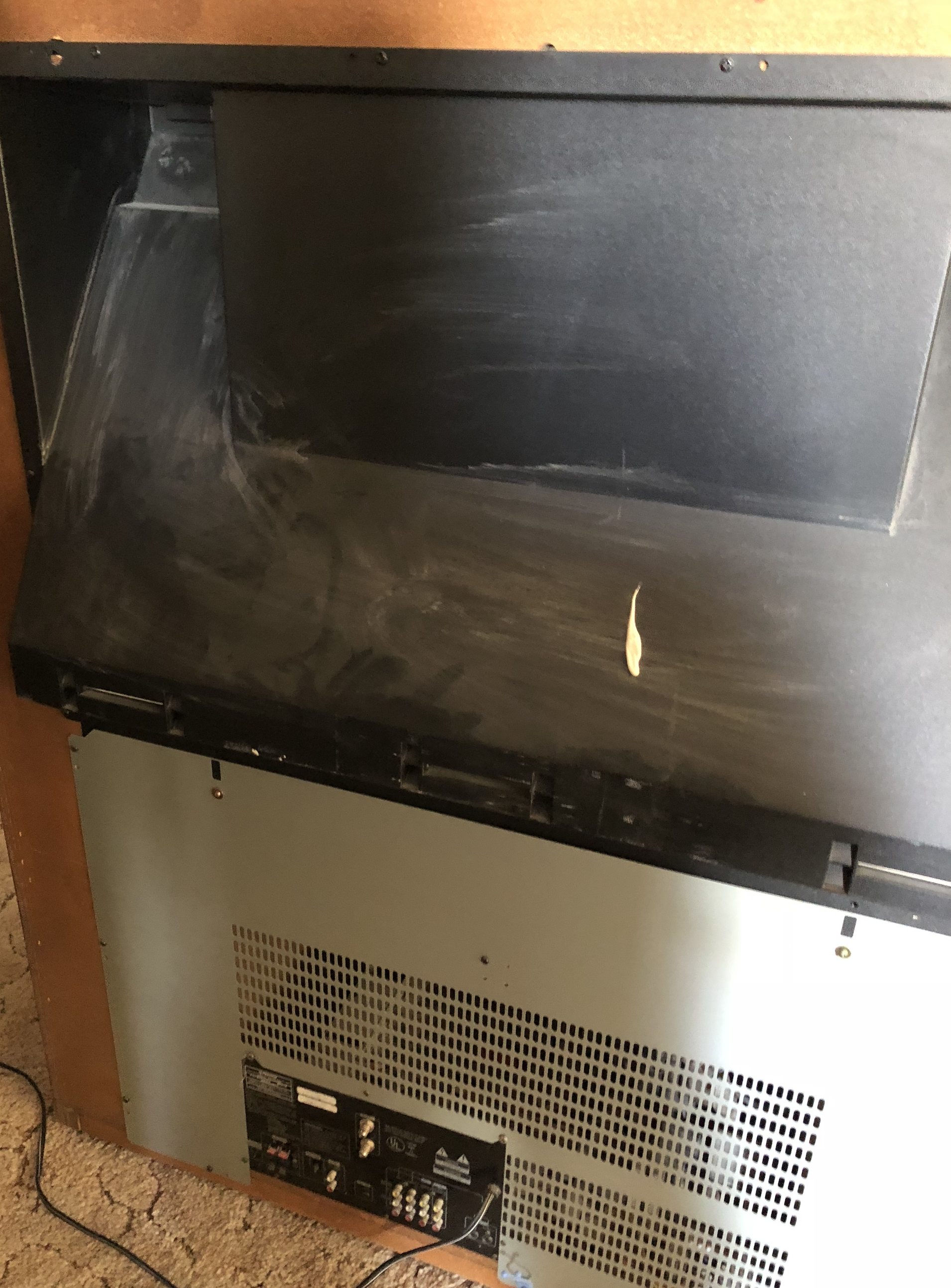 Unscrew the grill. A dusty circuit board is visible, connected to an internal metal mesh: 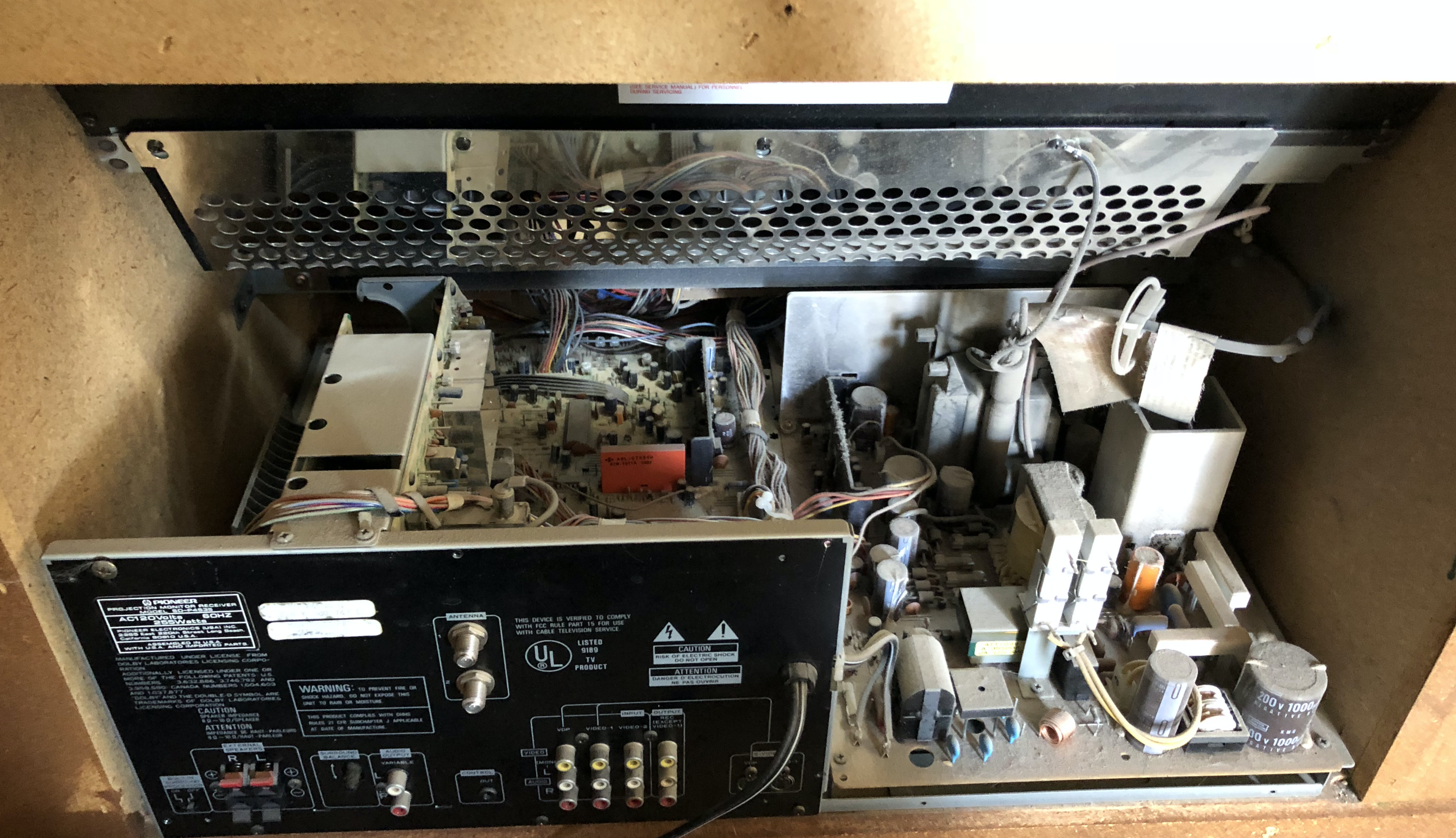 This is part of the high-voltage power supply. Beware, according to Wikipedia, this HV powering the CRT may be as large as 25,000 volts:

Utilising a 2-inch monochrome CRT driven at a very high accelerating voltage for the size (typically 25 kV), the tube produced an extremely bright picture which was projected via a schmidt lens and mirror assembly onto a semi translucent screen of typically 17 to 19 inches in size.

Closer look, in all its dusty glory. We can now clearly see there are two boards here, power on the right, something else on the left: 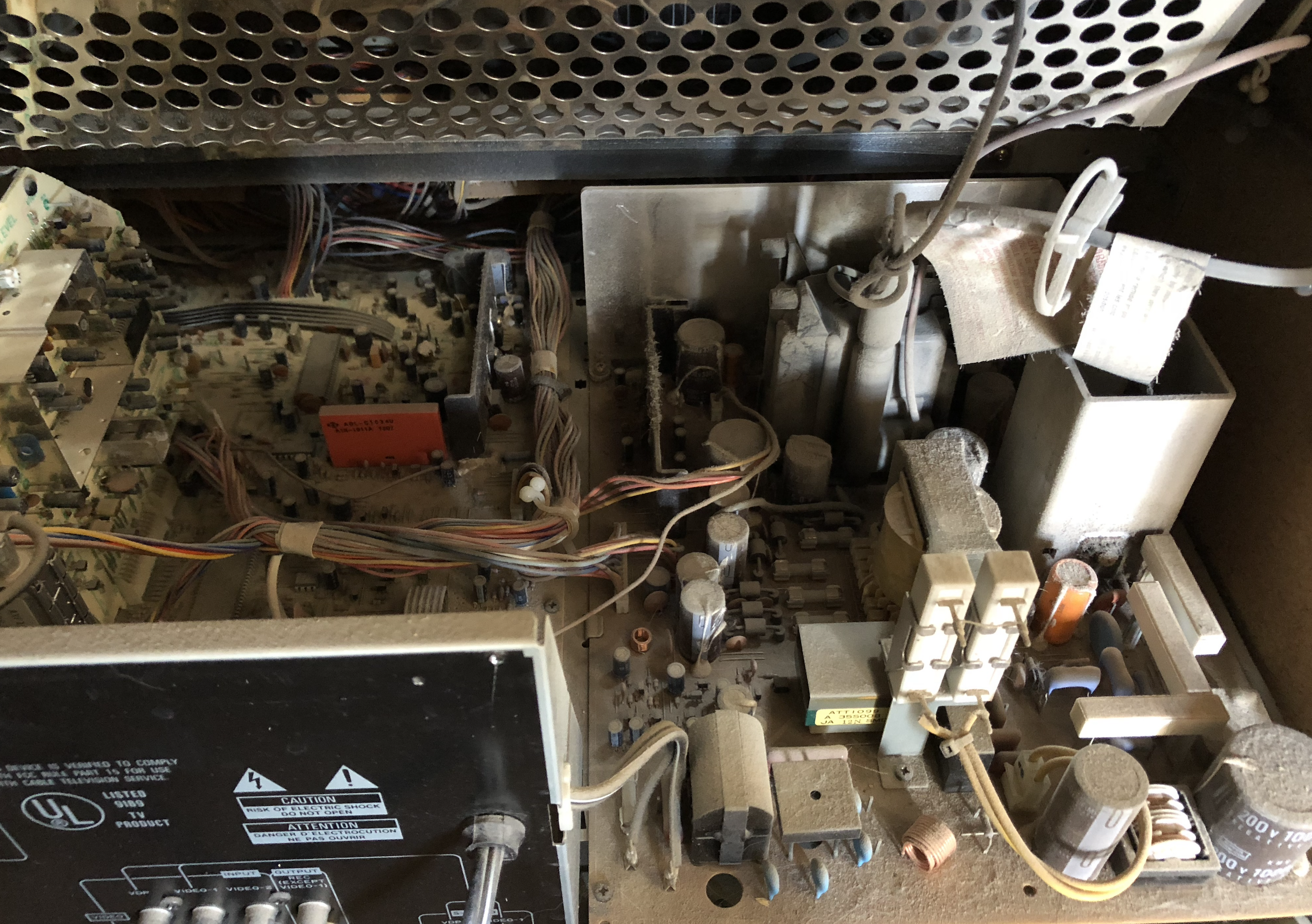 Remove the plastic panel on the top, it is an impressively shiny mirror, angled facing the screen. Behind it above the circuit boards are lenses from three miniature CRTs, facing backwards (hence “rear projection”): 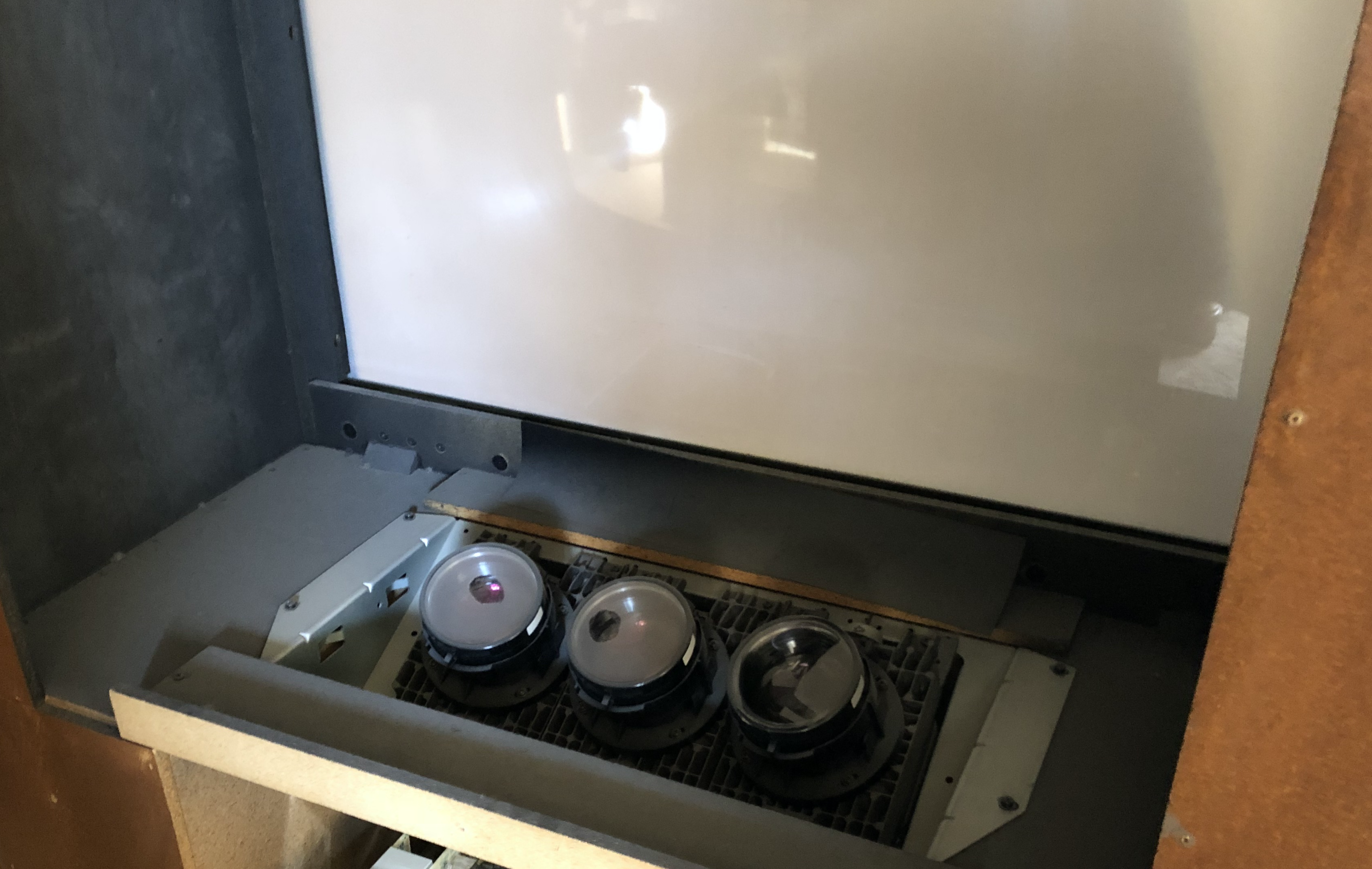 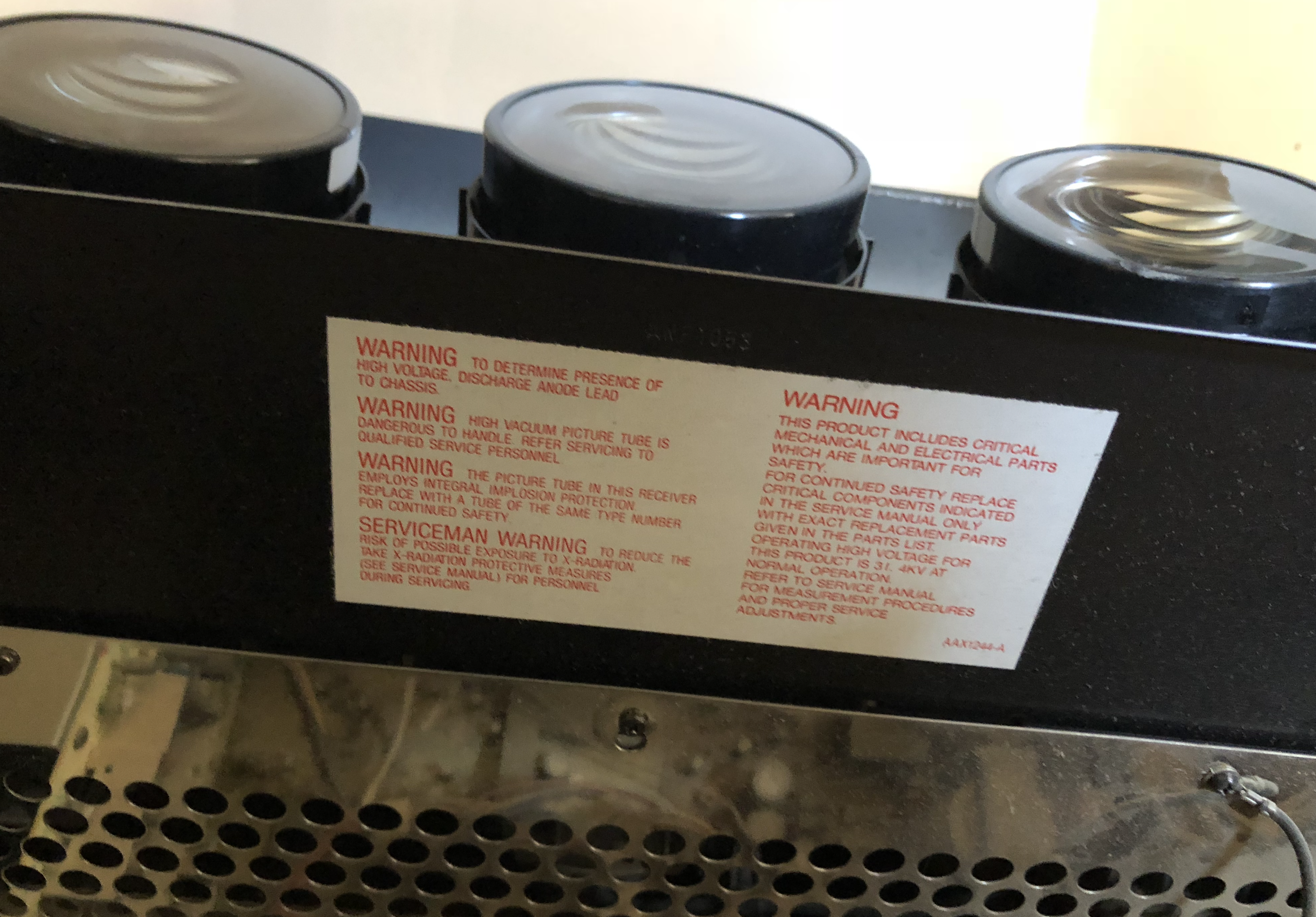 “To determine presence of high voltage, discharge anode lead to chassis. High vacuum picture tube is dangerous to handle. Refer servicing to qualified service personnel. This picture tube in this receiver employs integral implosion protection. Replace with a tube of the same type number for continued safety. To reduce the risk of possible exposure to X-radiation, take X-radiation protective measures (see service manual) for personnel during servicing. This product includes critical mechanical and electrical parts which are important for safety”, and here we find the exact magnitude of the high voltage: “This product is 31.4 kV at normal operaton”, wow! Higher than the typical high voltage of RPTVs. Could be useful to someone more adventurous than I, but I’m more interested in the electronic circuitry.

Wiring to the front panel: 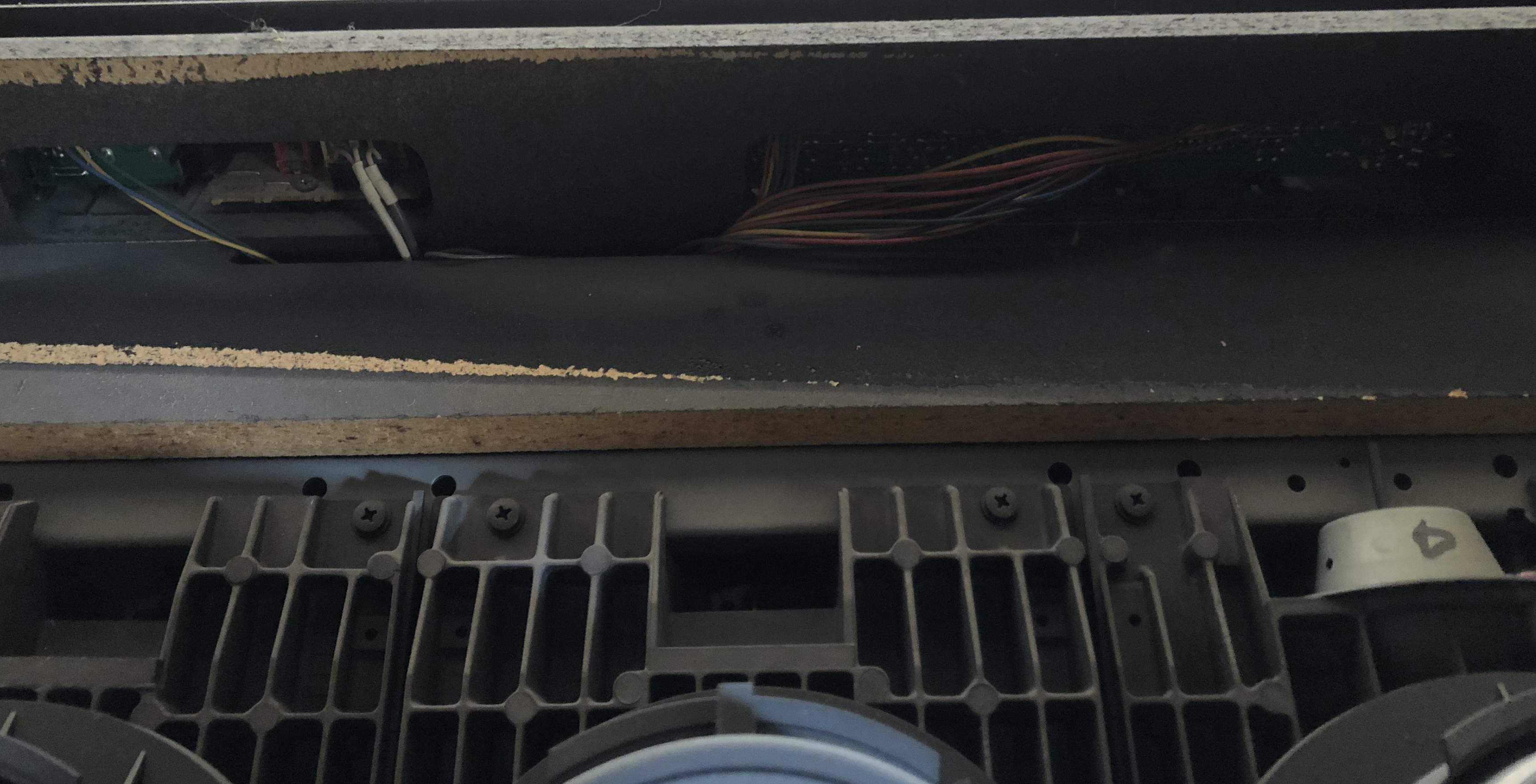 beneath it is another label with a diagram showing how the projectors are positioned facing inward, and that they are for red, green, and blue (RGB), in that order. 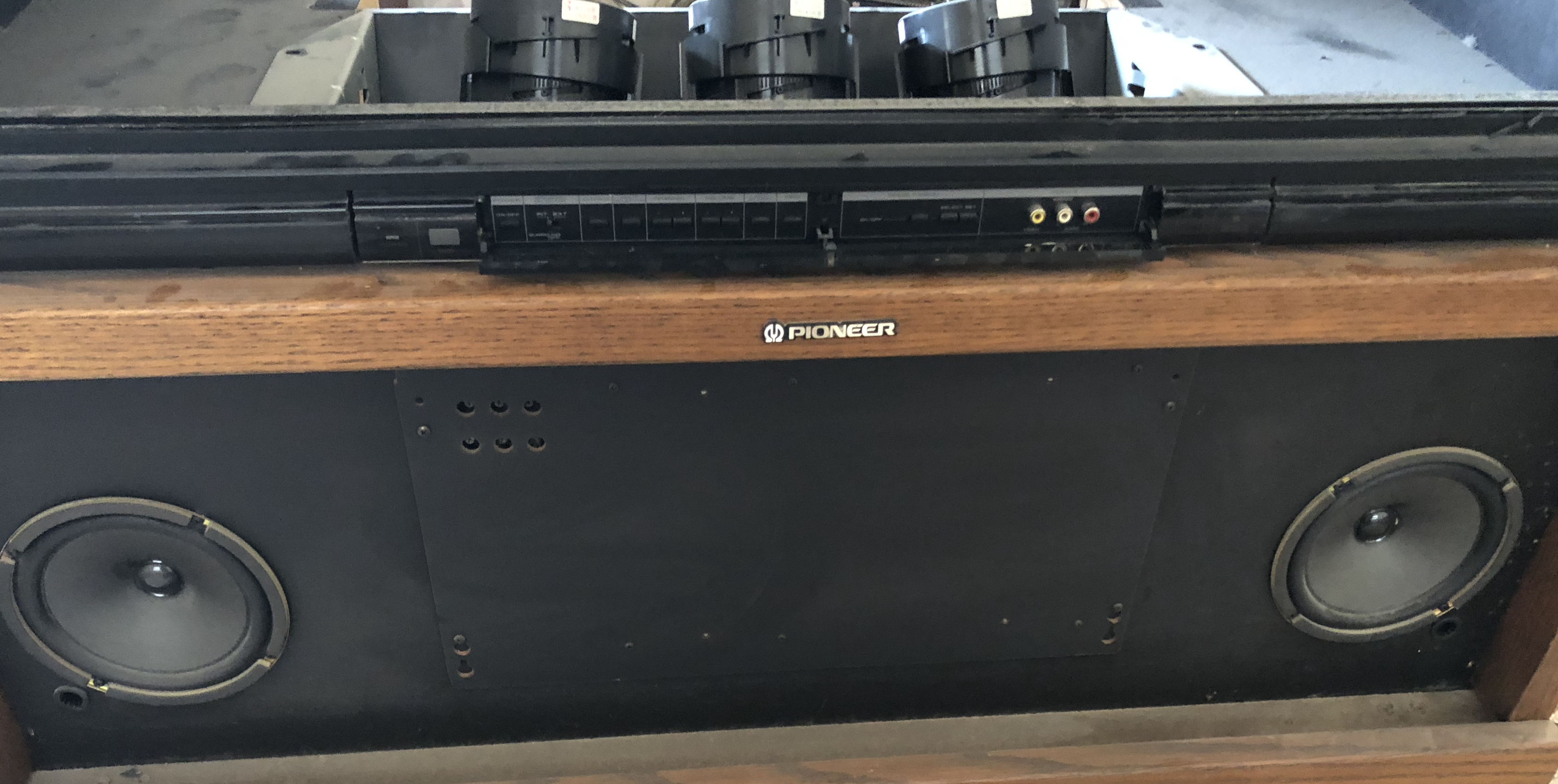 The system is quite modular, with removable cables between each of the boards. Removing the three small front panel circuit boards, and a shot of the three tubes: 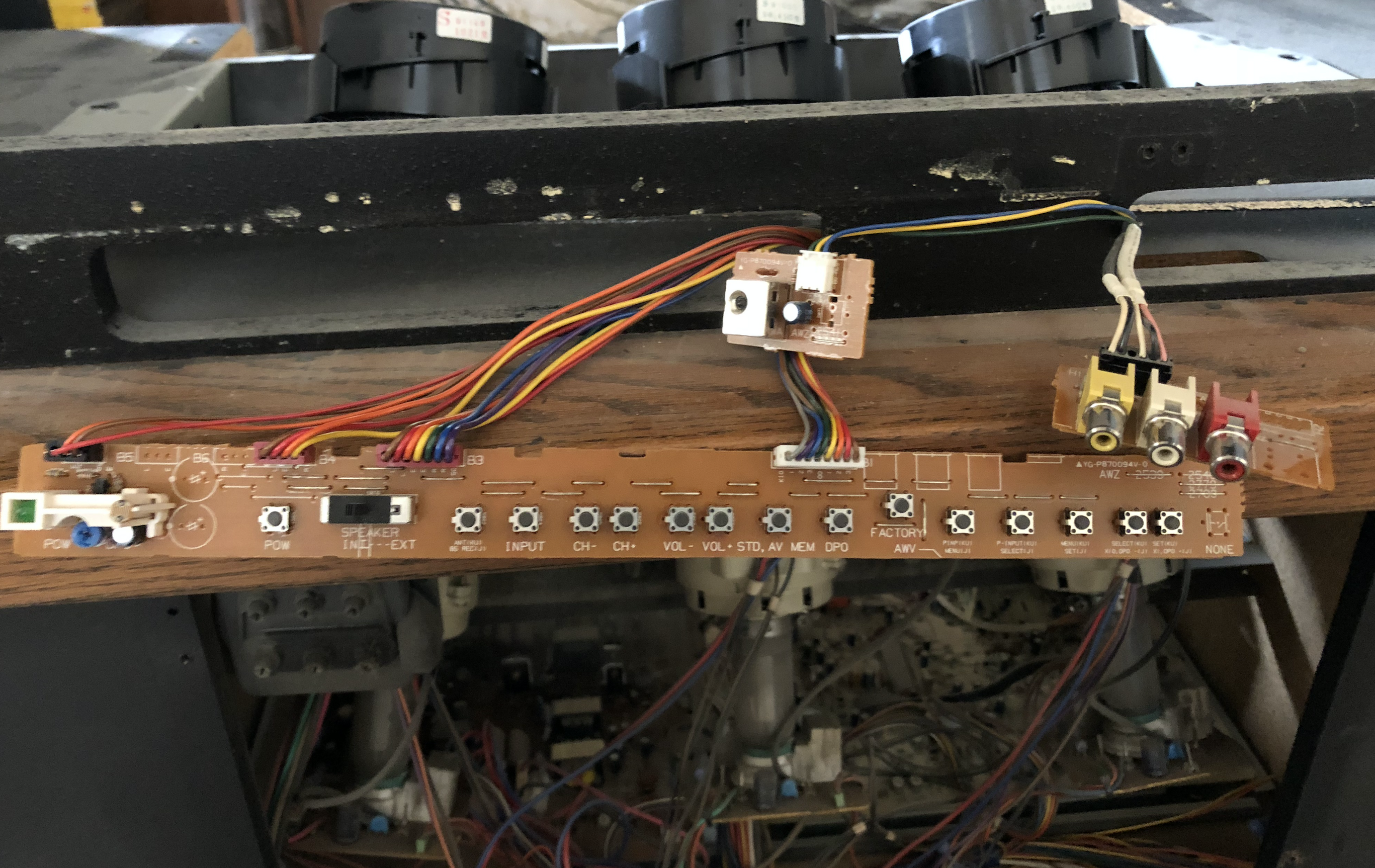 Removing the tubes, a better view of the boards beneath it, and the nice wooden particle case: 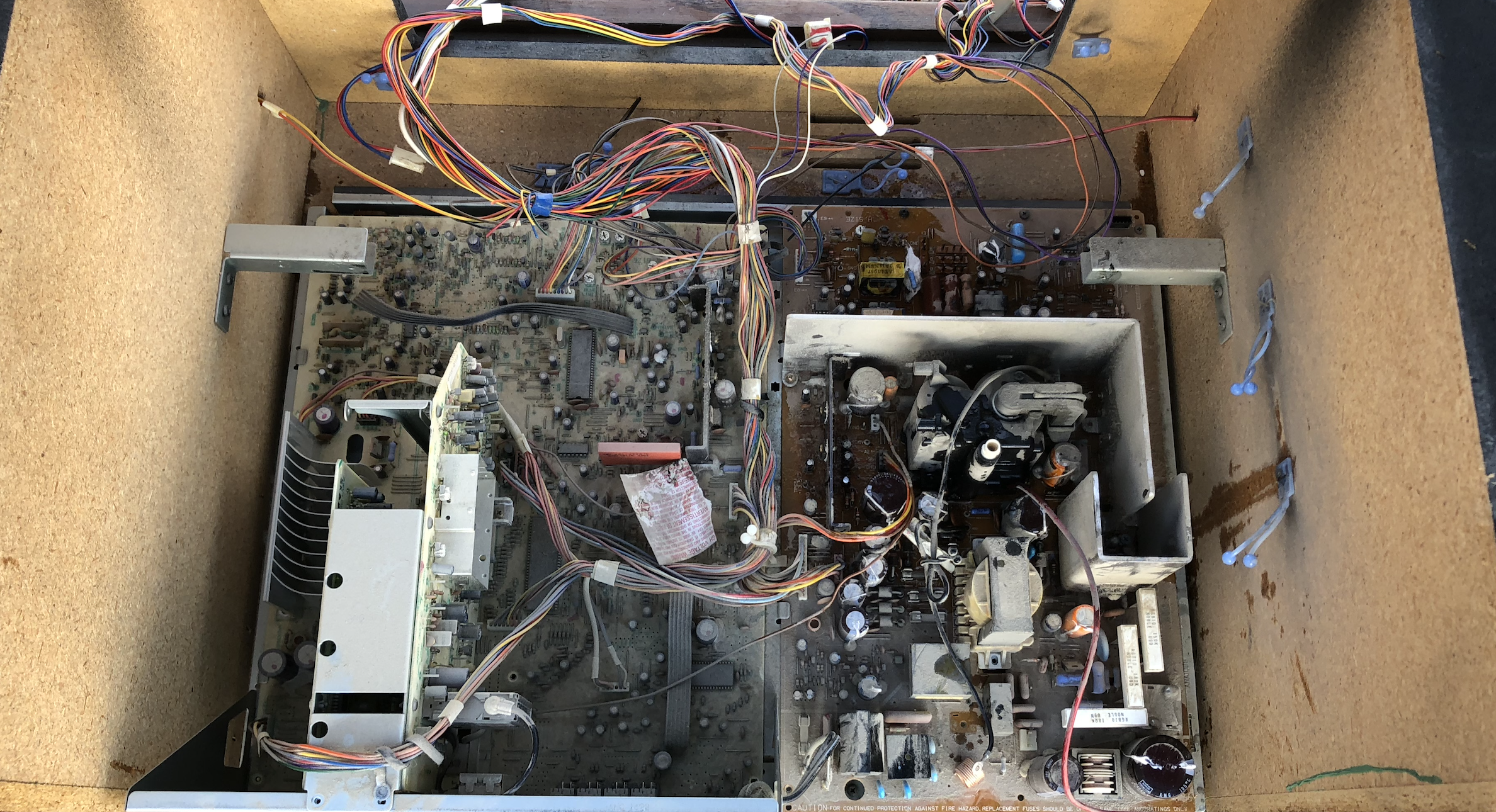 Take out the boards, blow them off, and take a look. How many PCBs does it take to build a big screen TV in the 80s? Six or more, apparently: 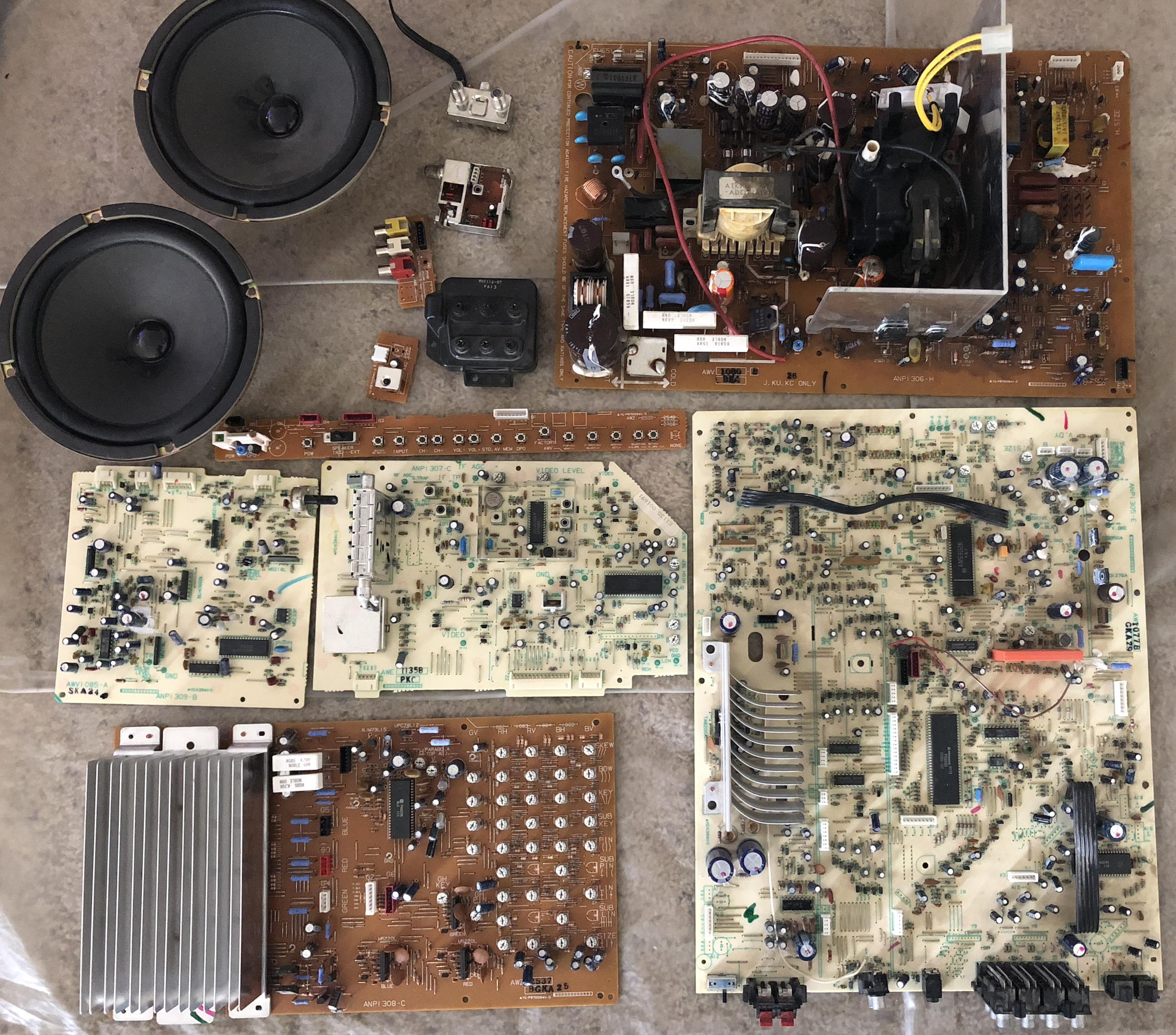 From top to bottom, right to left, the main boards are labeled as follows, along with my estimate at their function:

This board is impressively large, measuring 15” x 11.75”. Single-sided. You don’t seem them this large much anymore. When I enter the dimensions in PCBShopper to get a ballpark quote, it warns me: “You have requested a size of 15 x 11.75 inches. That seems unusually large. Do you want to continue?”. In small quantities, getting a board of this size manufactured may set you back over a hundred dollars. Must have been worth it back then, I guess. Barely fits on the bench, these are the best shots I could get of it (and these photos were too big to upload here so I had to resize, bear with me): 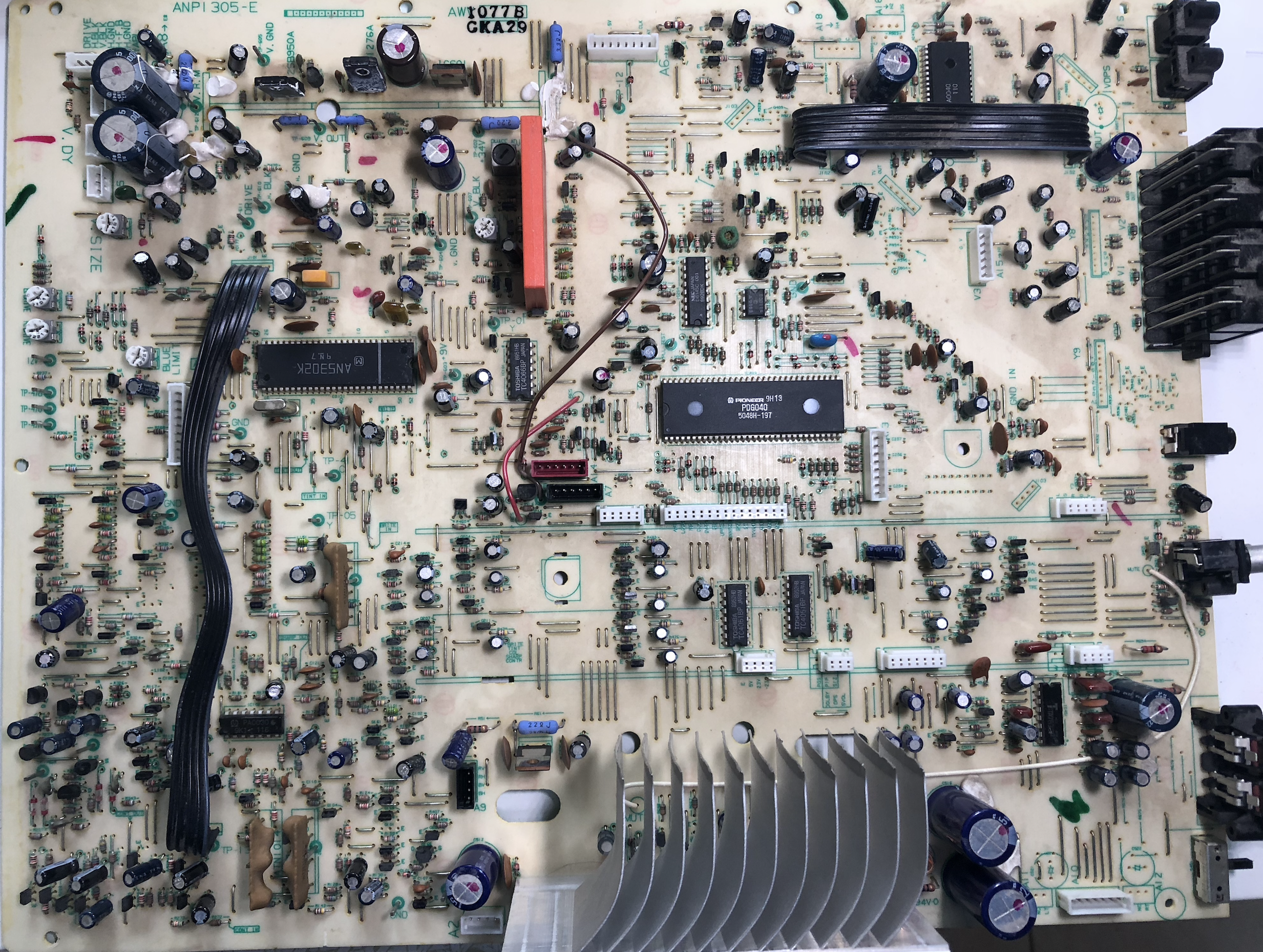 Looking at some of the DIP chips:

There are also 3-pin linear voltage regulators: a 78M09A (IC601, 9 volts), and 78M05 (IC206, 5 volts). The chip in the HZIP-12 package with the big heat sink is a Toshiba TA8200AH Dual Audio Power Amplifier. This thing has some big speakers, no wonder it needs a big amplifier. Other interesting parts are the brown lumps labeled ATNI1013-A (two of them) and ATNI1014-A, and the large orange box labeled ADL-CT03AU ATN-101A 1907, possibly some radio components? Inductors? 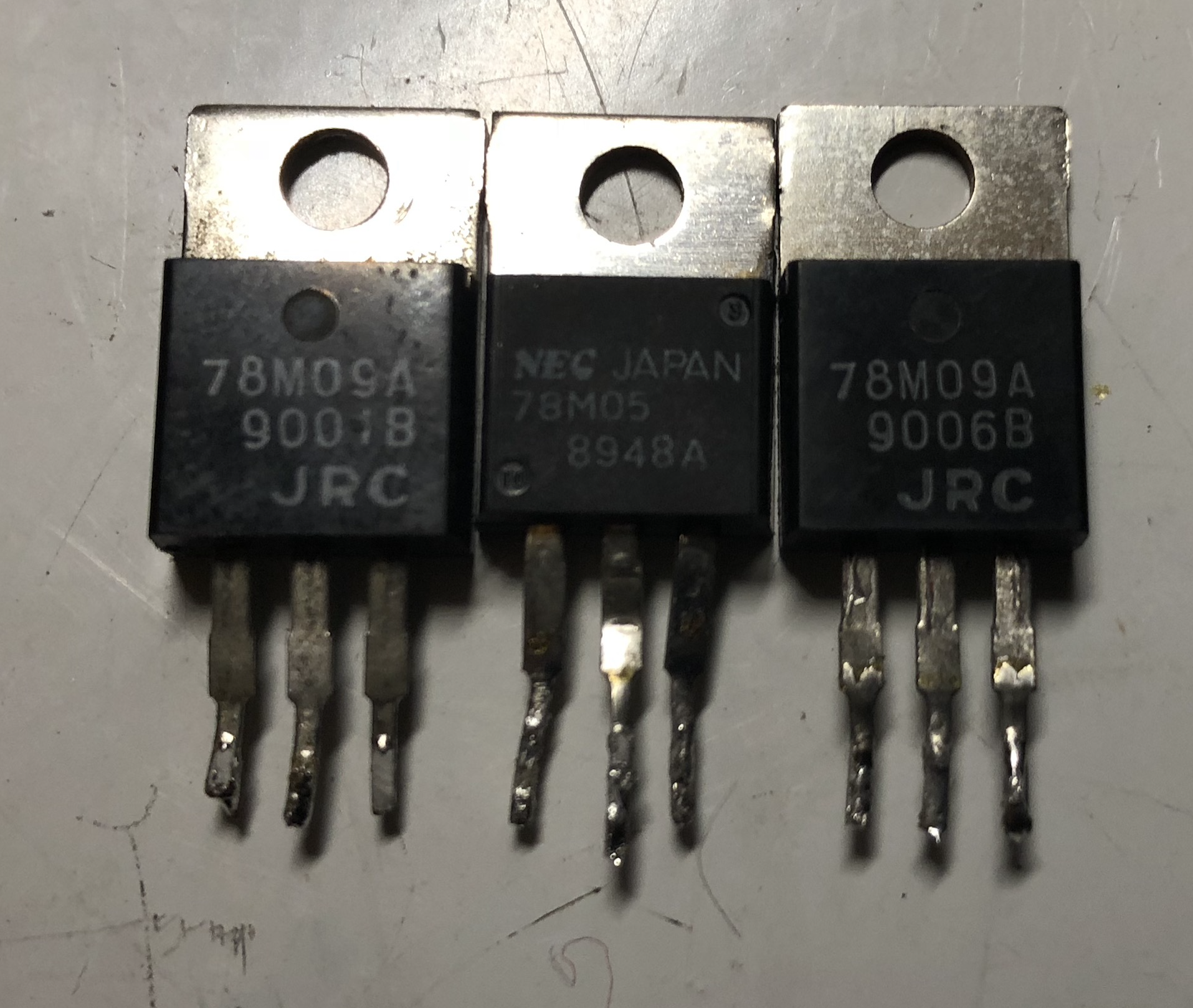 The date codes indicate these were manufactured in 1990 and 1989, respectively. 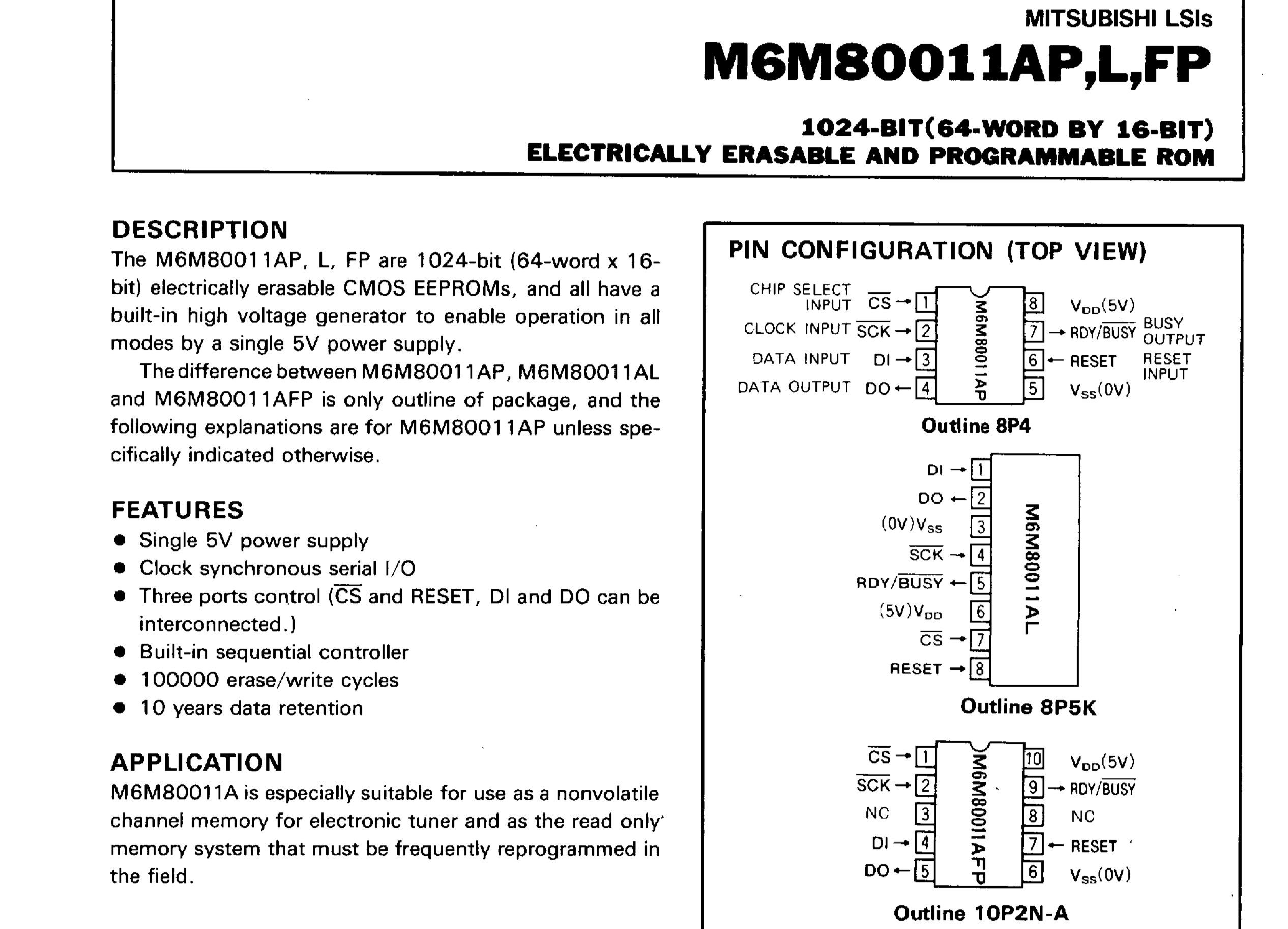 Wired up to a Bus Pirate 3.6 as follows:

The data sheet doesn’t use the term SPI, but it says “M6M80011AP is a clocked serial port compatible EEPROM, and data is input from the rising edge of the clock signal and output by synchronizing to the falling edge of the clock signal.” On the Bus Pirate, type m and 5 to select SPI, go with a conservive 1 30 kHz, 1 clock polarity idle low (default), 1 output clock edge active to idle (default), 1 input sample middle phase, 2 chip select /CS active low (default), 1 output type open drain.

No such luck. This chip may be something else than EEPROM, I may have damaged it, or hooked it up wrong. This was my setup: 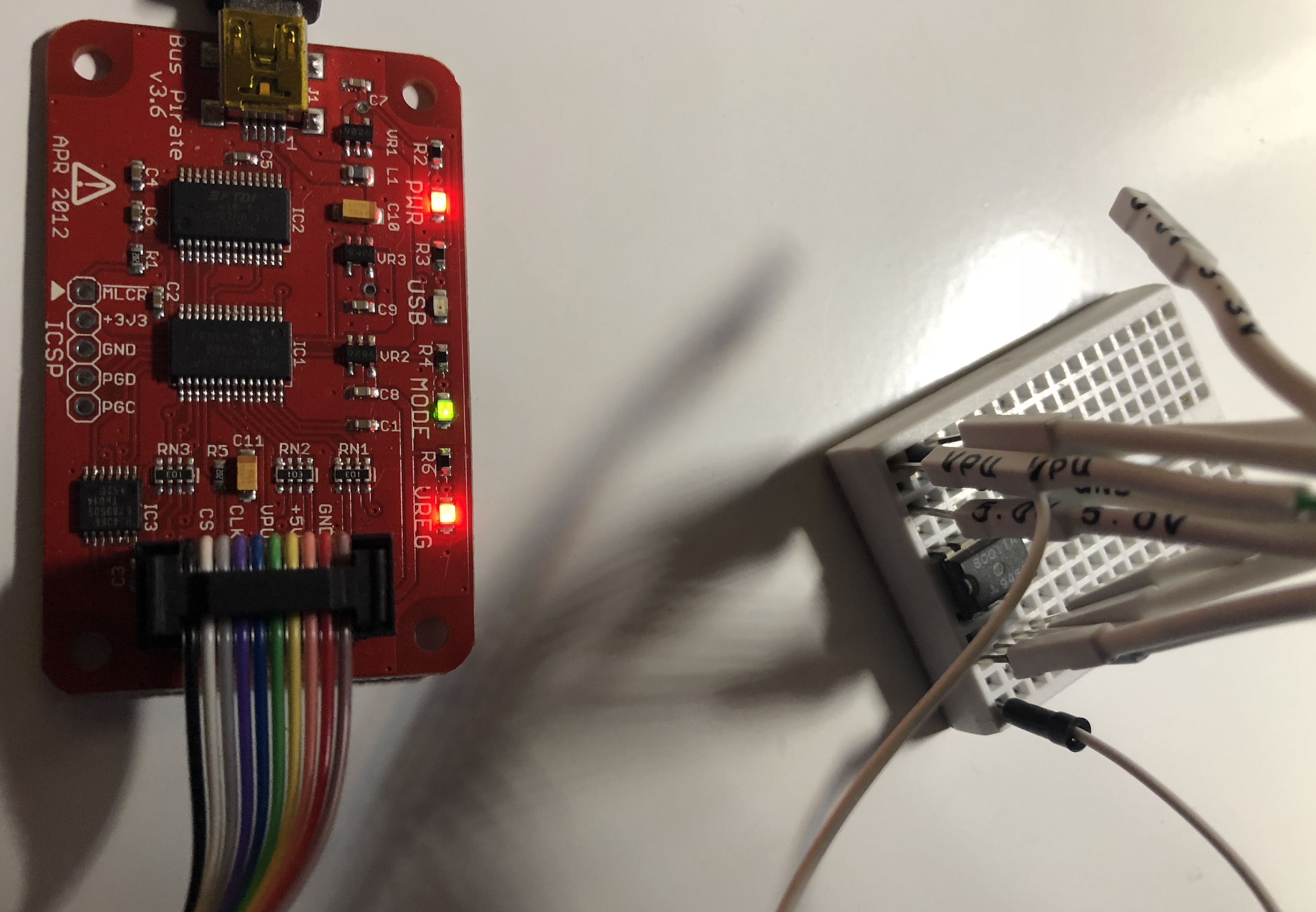 Moving onto the next board, the grimiest of them all. Made some effort to clean it up, but a lot of dust stuck to this board and was covered in oil dripping from the lenses, and its the board with the chunkiest components making it difficult to clean. Almost considered discarding it, but the parts will be easier to clean after removal from the board. Brace yourself, here is this dirty PCB:

The other side is cleaner:

This board is serious business, check out those fat traces for high voltage on the hot side. Power resistors made out of cement. A thick aluminum heat sink cornering the transformer. Off the board, but nearby, are two 0.47Ωk (not kΩ, I measured - this is milliohms not kilohms) RGB20 NOBLEU9D cement resistors in series. Lots of fuses. The big capacitor in the corner is a 200V 1000µF Nippon Chemi-Com. Predating the capacitor plague of 1999-2007, this capacitor and the others like it (a 200V 560µF nearby) are still good.

Not my favorite board.

Back to something more manageable. The ANPI307-C is clearly related to RF, there were two metal shields over components, I removed: 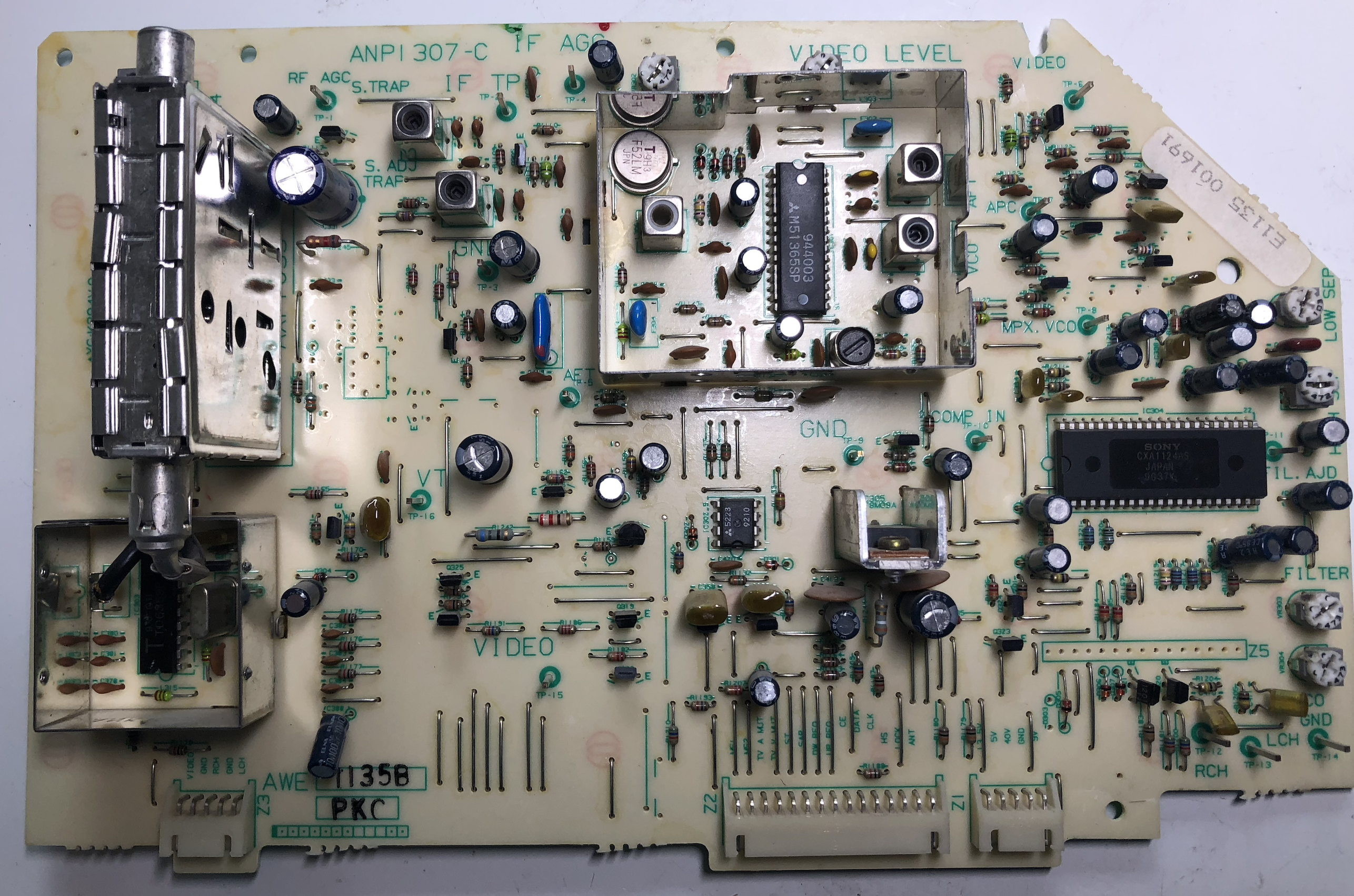 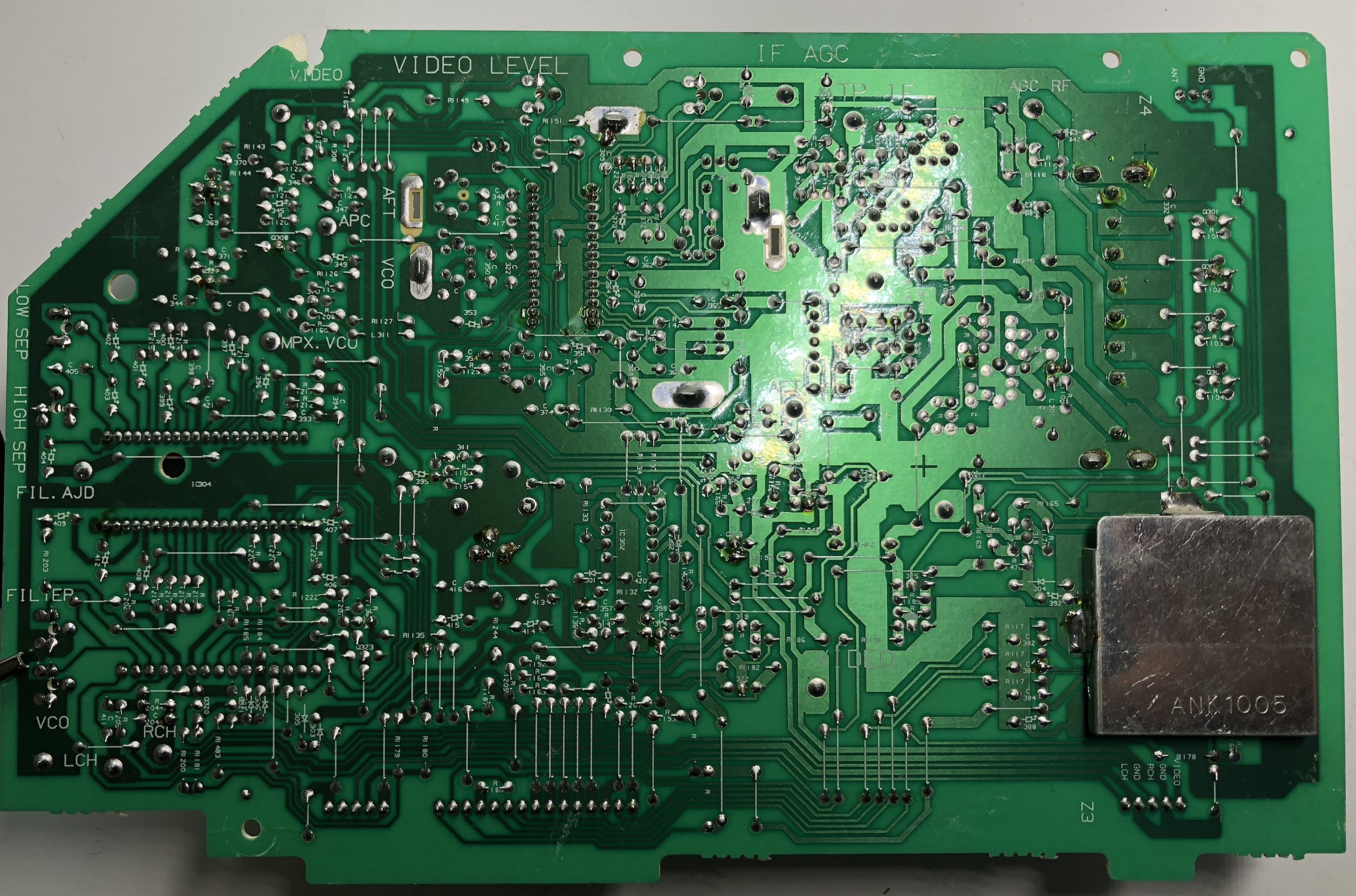 The crystal’s leads are behind a metal shield, desoldered it then desoldered the crystal. For some reason the crystal had longer leads and they were bent in a zig-zag (were the long leads picking up interference so they put a shield over it instead of cutting them?). Tested the crystal in a frequency tester, expecting 4 MHz. But it only read zero, unclear why (damaged?).

Not much generically useful here, but it does have some trimmer pots. Moving on.

Speaking of trimmer pots, this board has 32 of them, ought to be enough for anybody: 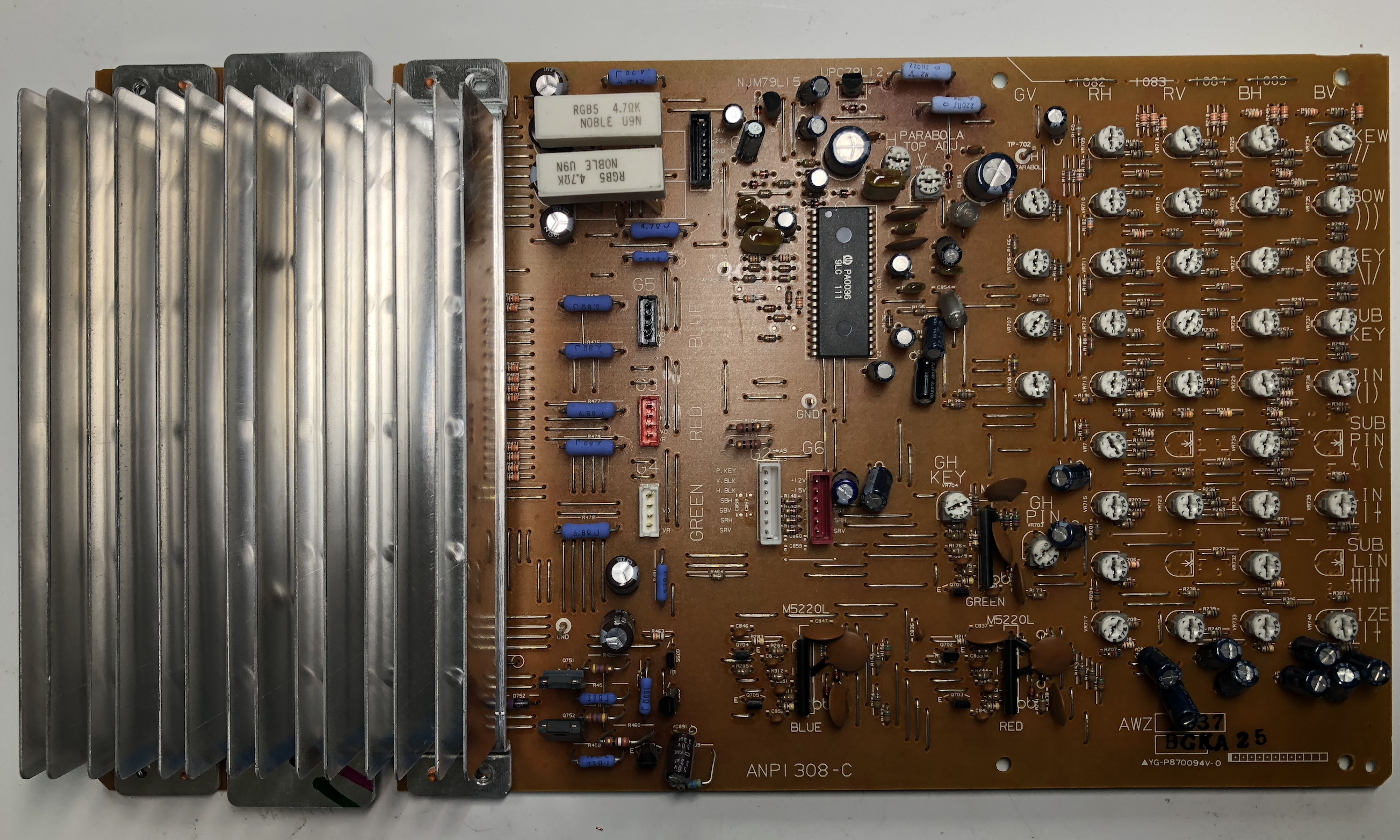 I’d say it is related to video. The three SIPs, for red, green, and blue, are Mitsubishi M5220L 9702, more opamps: Dual Low-noise Operational Amplifiers (dual power supply type). Of course, the elephant in the room is that big heat sink over there. What’s under it? 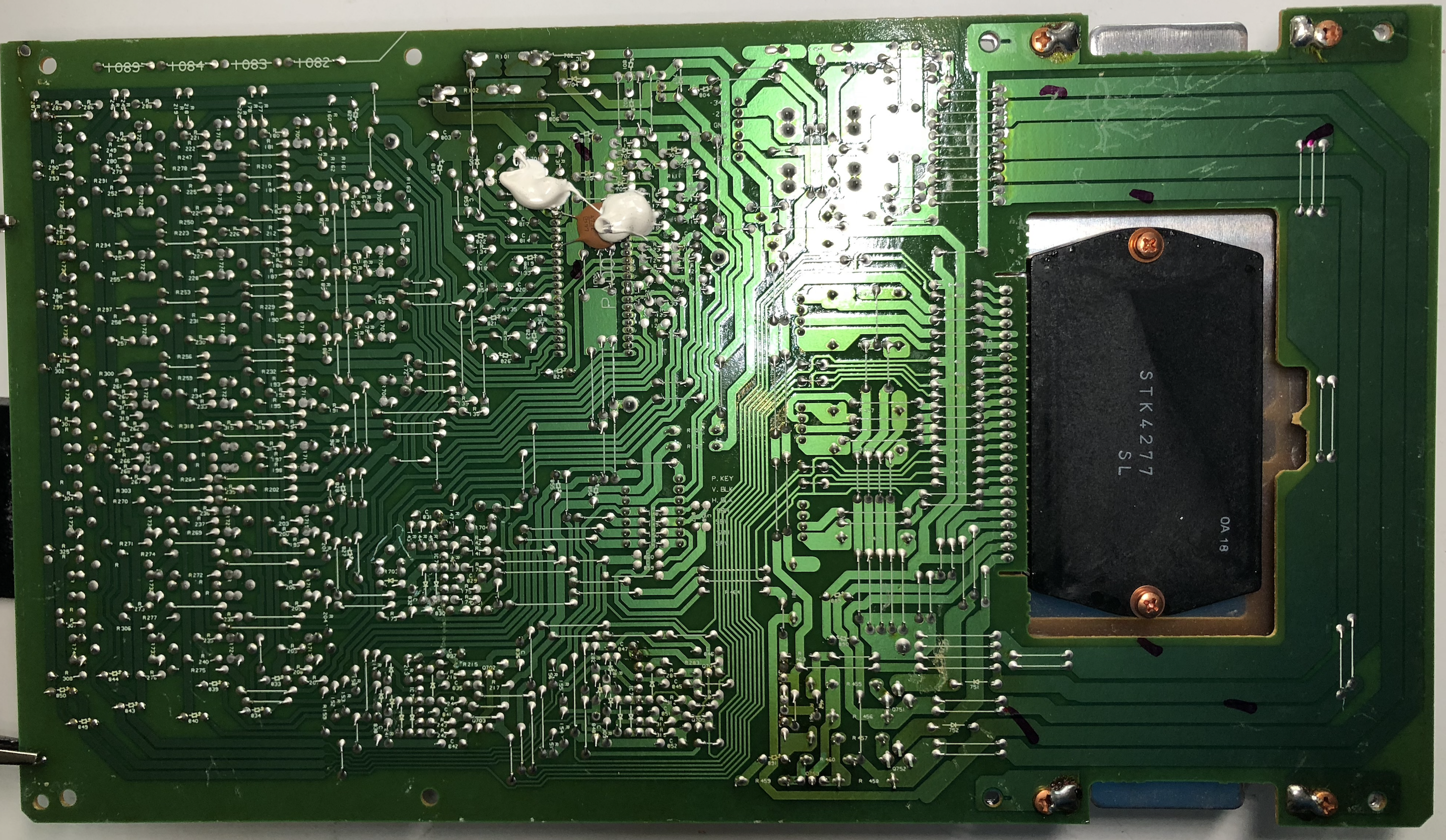 Labeled “STK4277 SL OA 18”, and much of the board connects to it. Pioneer has it on their website, not available but says retail price $75.25: PART DETAILS - STK4277-SL. Found a post from someone trying to replace this part in 2004, fone.freaky asked on electronicspoint forums, Convergence still off after replaced STK4277 in Pioneer 6081 tv, John Del replied:

The STK is just the amplifier, you need to scope the error correction waveform inputs that come from the ramp generator section.

Couldn’t find the exact data sheet, but we know it is a 5-channel convergence correction power amplifier. Found the STK4145MK2 data sheet, maybe not too dissimilar. Can this chip be usefully used in another circuit?

Moving into the final stretch, this board is for audio, indicated by the “Dolby Level Adjust” text: 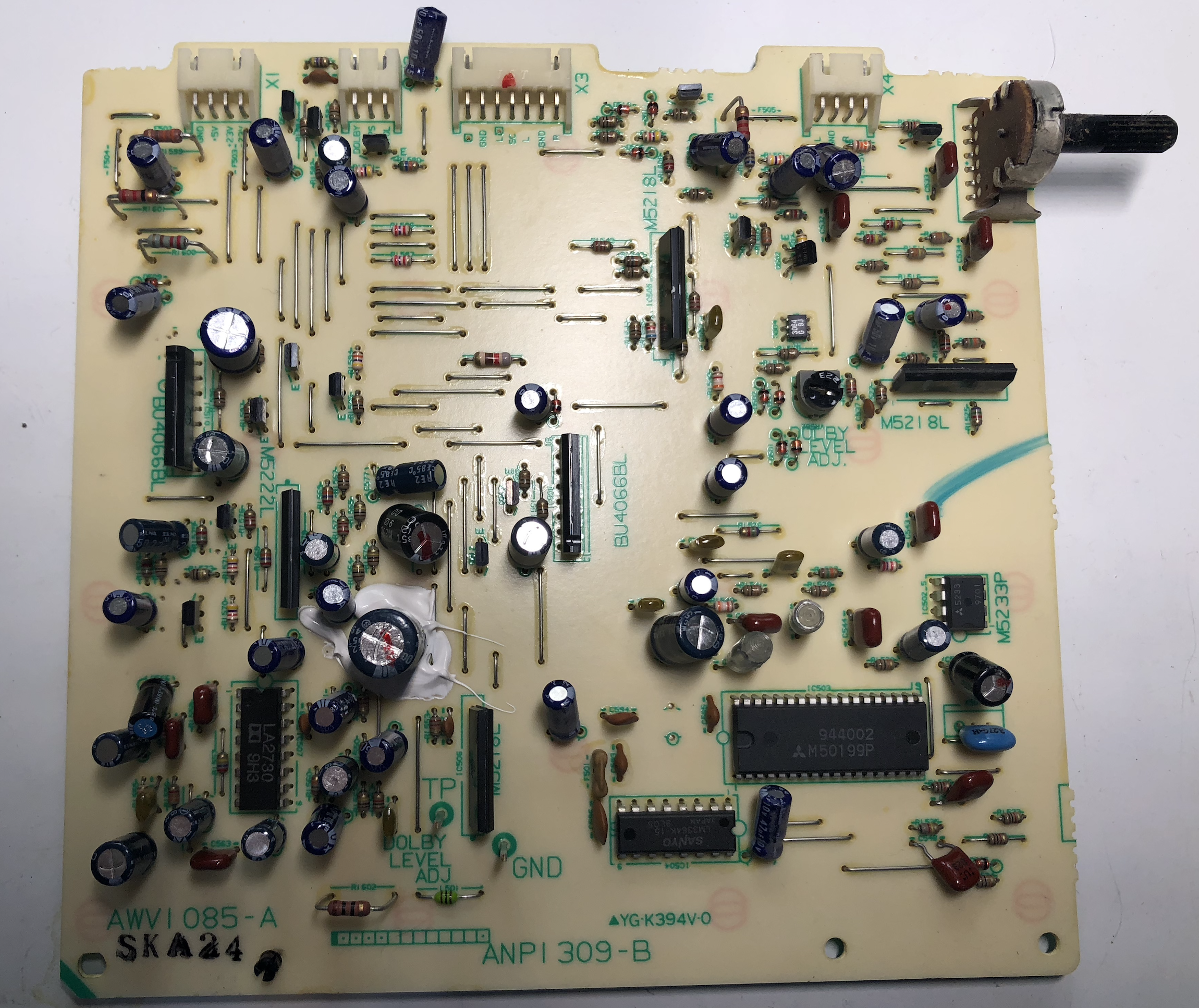 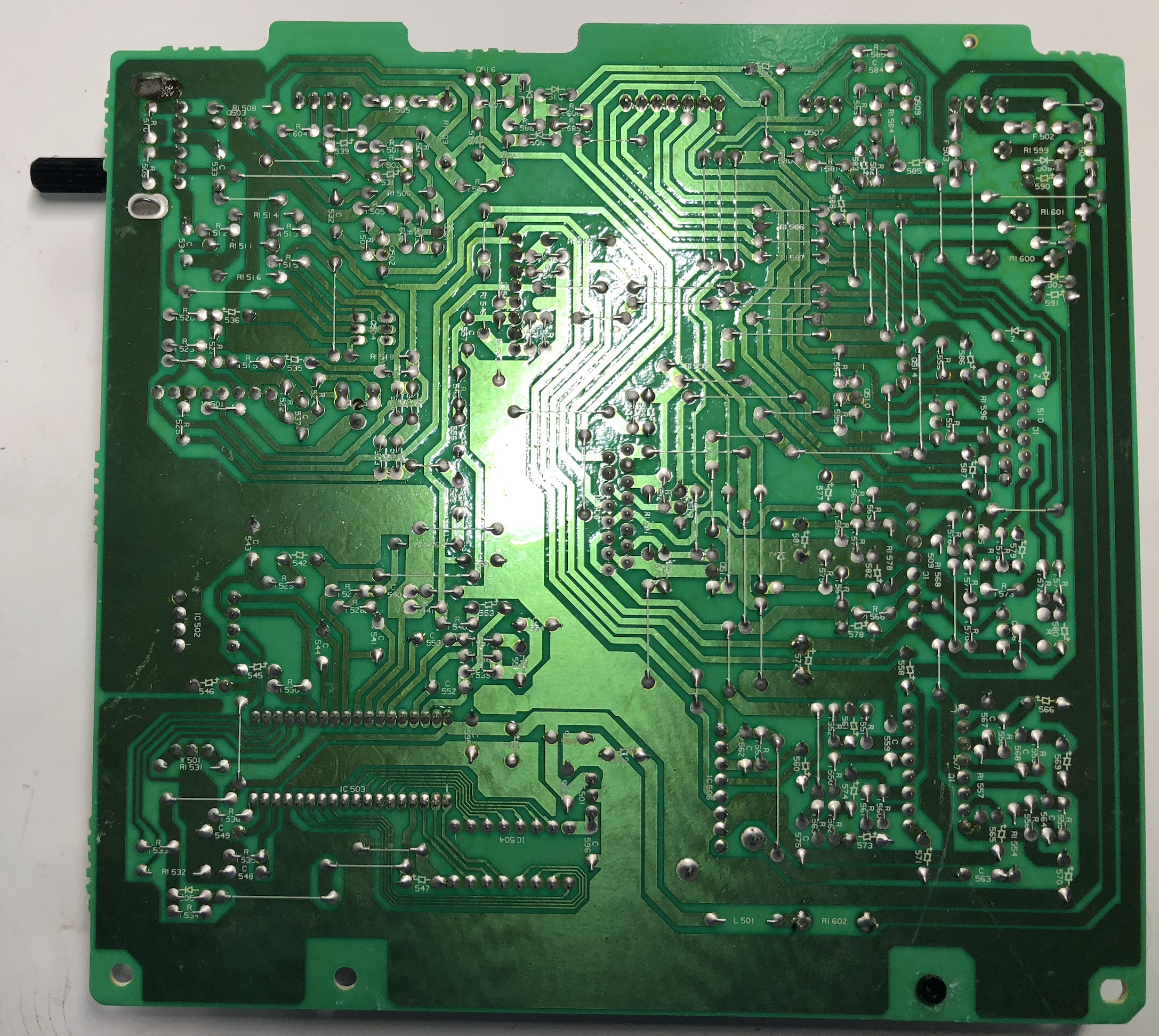 Were Single Inline Packages (SIP) more common back then? This board has several, as well as some DIPs. Or actually, they are ZIP, Zig-zag in-line packages. List:

Could be an interesting project to try using the DRAM somehow. dmitry.gr’s Linux on an 8-bit micro? used a 30-pin SIMM memory module, refreshed every 62 ms, driven from an ATmega644a, for a maximum bandwidth of 30 KB/s. Could the Sanyo LM3364K dynamic RAM be driven in the same way? But I had trouble finding a data sheet, and it is not clear that’s even what this chip is.

Not much to these, buttons and jacks. There’s a lot of good switches here, I desoldered one but it took too long, taking them all off would best wait for a hot air gun. But the cadmium sulfide CdS photoresistor is worth salvaging. I measured about 15 kΩ resistance in ordinary room lighting, and about 5 kΩ under a bright lamp. 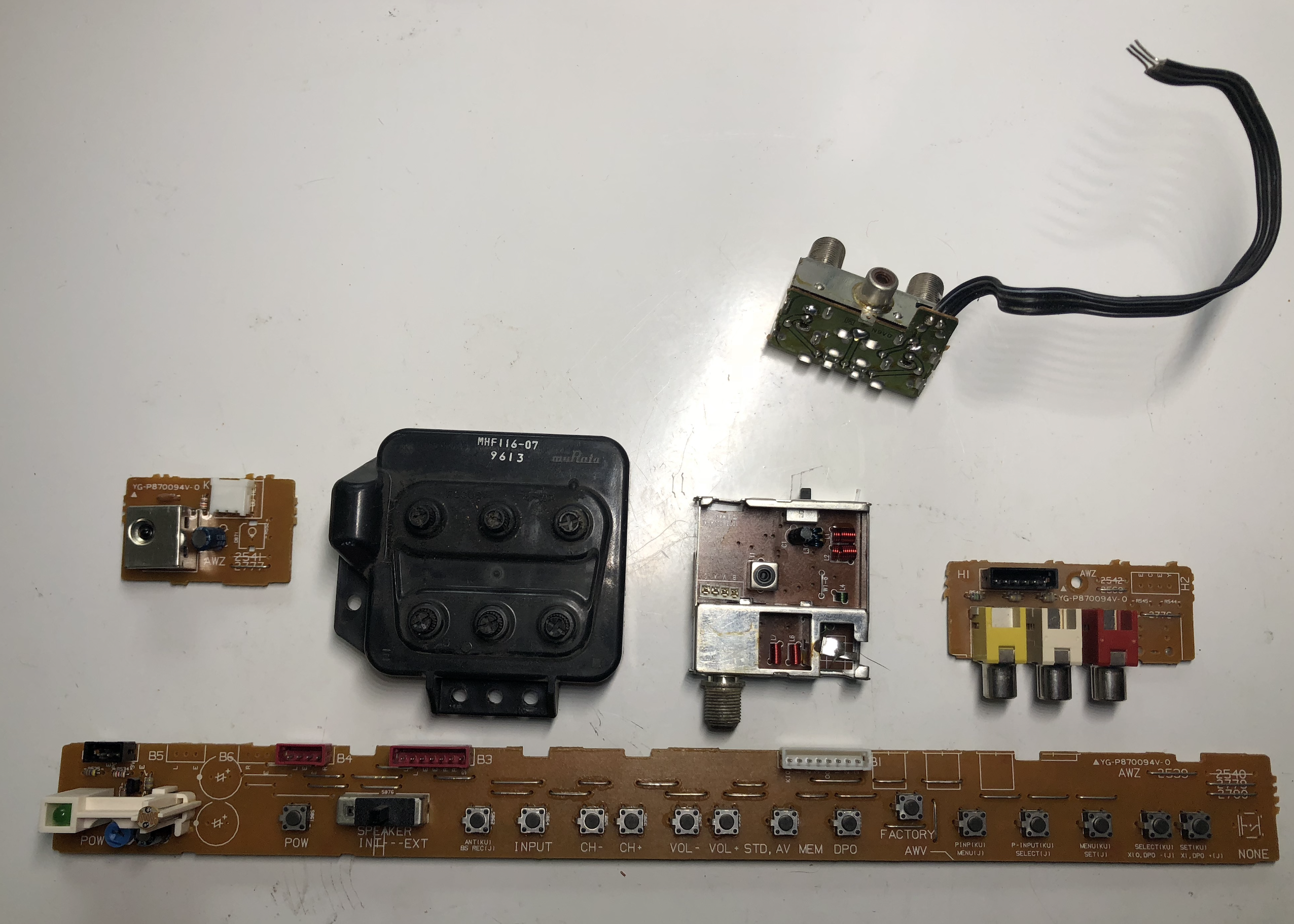 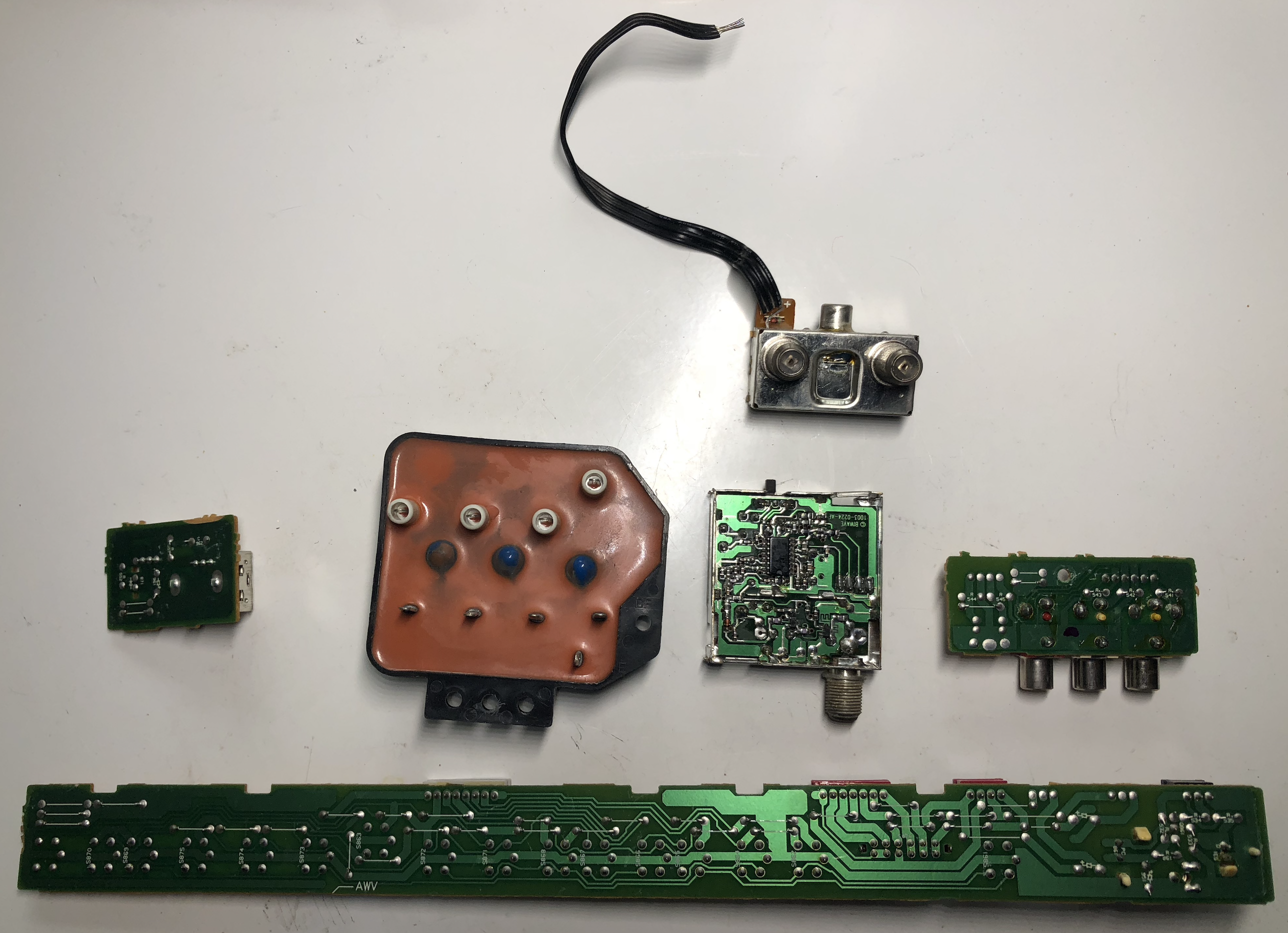 The RF adapter is actually not part of this TV, but was a separate unit labeled “Dreamcast Model No. HKT-8820 NTSC-M CH3-CH4”, with ANT.IN antenna input, TV output, A/V IN, and a select channel 3 or channel 4 switch: 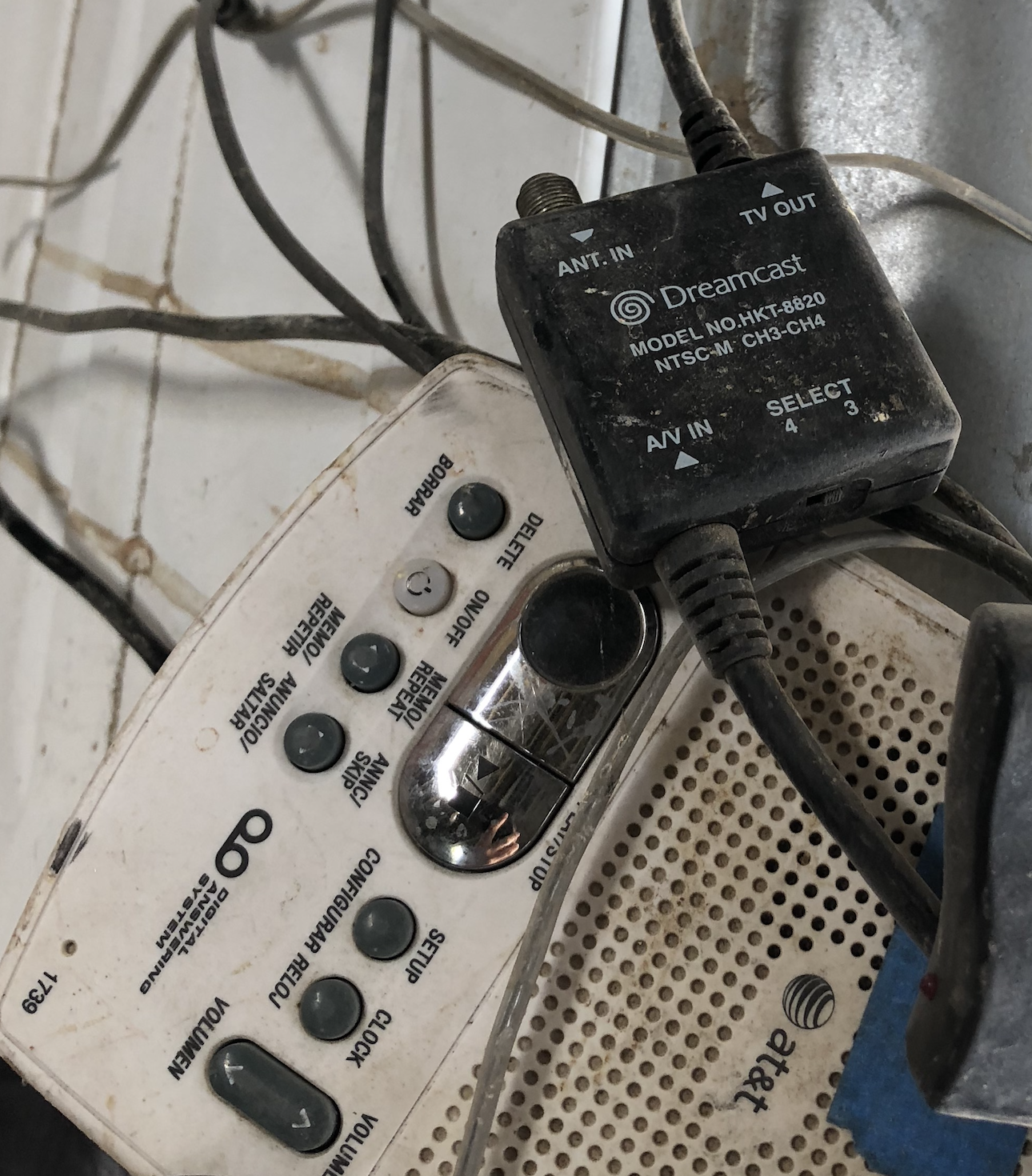 A channel 3/4 output was a common output selection for consumer audiovisual devices sold in North America that were intended to be connected to a TV using a radio frequency (RF) signal. This channel option was provided because it was rare to have broadcast channels 3 and 4 used in the same market, or even just channel 3 itself. The choice allowed the user to select the unused channel in their area so that the connected device would be able to provide video and audio on an RF feed to the television without excessive interference from a broadcast signal.

Bend away the metal shields, and parts can be desoldered from the boards. Nothing terribly interesting, but the color-coded inductors look kinda cool, they came in red, green, and blue: 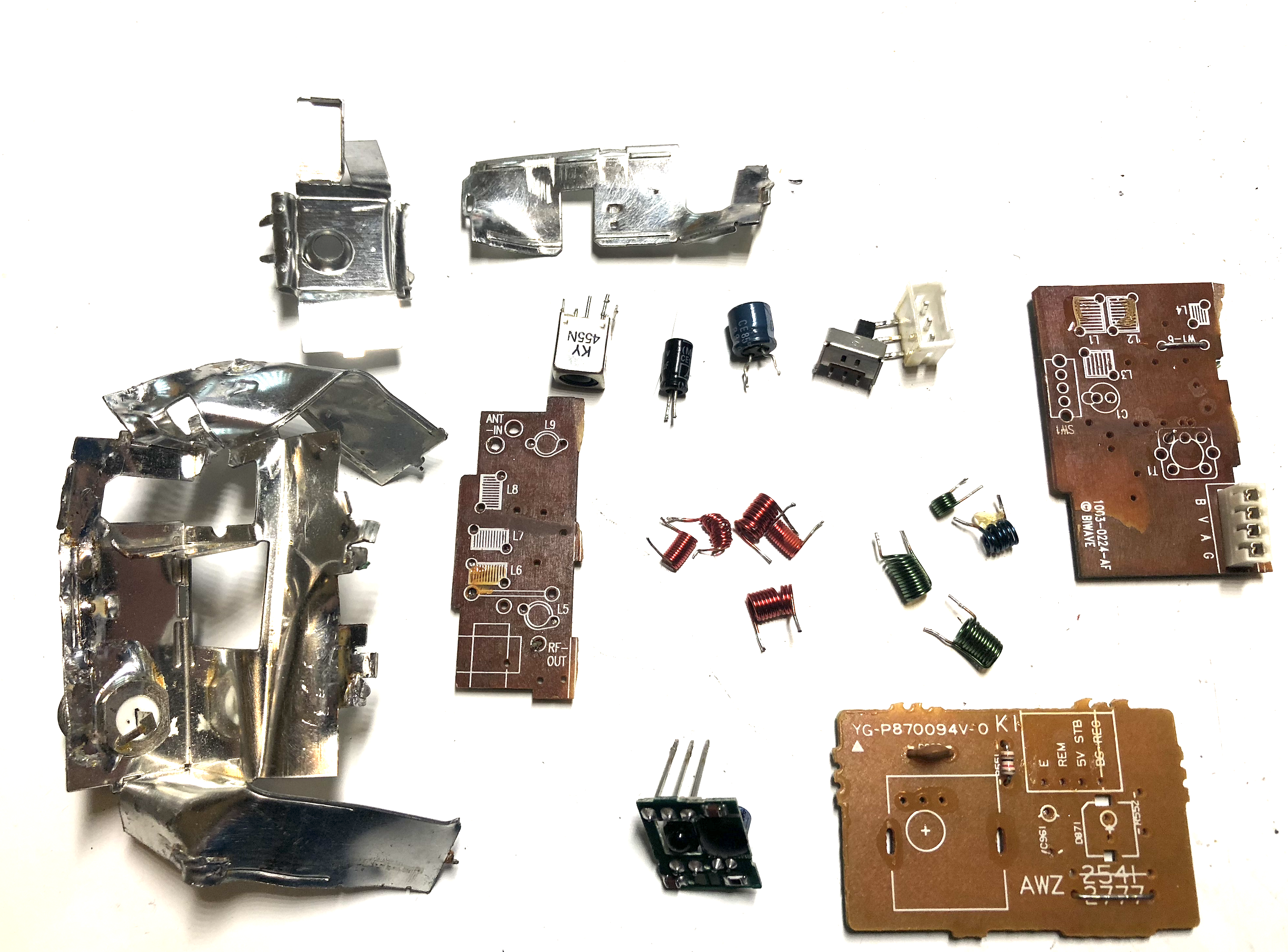 Memories of Analog TV: The 90s and 00s provides some insight into the old analog era. Nowadays, it is largely superseded by digital televison, analog services turned off as part of the digital television transition. Receiving modern television on this big screen would have required a digital television adapter. Better to buy a new TV.