With the USB port for device mode, one could present a virtual serial port over USB, connected to a real serial port. I already have one of these devices (in fact, a USB-to-serial adapter (or a USB-to-SWD adapter) was required to program the blue pill from a PC), but it’s a simple yet useful application worth touching on.

FTDI makes a [FT232R - USB UART IC], specifically for interfacing USB to serial. The chip is about $4.50/1 on Digi-Key, so Chinese manufacturers have taken to using alternatives: the SiLabs CP2102 or Olimex CH430. I’ve seen these chips on ESP8266 boards including those I used in The smart bulb / smart switch dilemma: smartening up a dumb wall switch. Requires installing their own drivers, but the hardware is cheaper. Case in point: 6Pin USB 2.0 to TTL UART Module Serial Converter CP2102 Replace Ft232 Adapter Module for $1.20 on Aliexpress.

However, I use a genuine FT232, on this board: SparkFun USB to Serial Breakout - FT232RL, a steep $14.95. Didn’t know of the cheaper alternatives at the time. But this converter works well, so I don’t regret it.

Supposedly there are USB-to-serial adapters available based on the STM32. It’s a practical application of the blue pill, but may not be the most competitive to alternatives.

The Black Magic Probe firmware is a great alternative, since it provides a composite USB device with a virtual serial port connecting to a UART (and another for GDB debugging SWD/JTAG). What are the pins used? Check platform.h:

which is PA2 for TX. According to this article, RX is PA3 even though I couldn’t find it in code. To connect a Black Magic Probe’s virtual serial port to another blue pill target to flash it:

then try flashing the target through this port:

Works well. Now I can save a USB port and get rid of my standalone USB-to-serial adapter in favor of the Black Magic Probe’s built-in functionality.

USB virtual serial, and what it has to do with modems

Some background on how USB implements what we see as a serial port on the PC.

The bDeviceClass of device defines the device type e.g. a USB Mouse is a Human Interface Device (HID) class device. This is given a hex value of 0x03.

More complex devices such as Communication Device Class (CDC) may also use a sub class to break down the device type into a smaller group.

bProtocol is used to qualify the sub class.

curious, the HID mouse example from libopencm3 uses a class of 0, not 3. Aha, Appendix C has the answer, class 0x00 means “USE Class information in the Interface Descriptors”. The official definitions are found at USB.org: USB Class Codes:

There are two places on a device where class code information can be placed.One place is in the Device Descriptor, and the other is in Interface Descriptors.

From the table, 03h for HID (Human Interface Device) is for use in the interface descriptor, so is the FTDI documentation incorrect? Some classes can be used in both the device and interface descriptor. Anyways, the pill_serial example (and BMP) uses EFh, “miscellaneous” class, with 02h subclass (common class), and 01h protocol:

Why not class 02h (Communications and CDC Control) or 0Ah (CDC-Data)? The comments say:

That’s a lot of documents. ATM is “a telecommunications concept defined by ANSI and ITU (formerly CCITT) standards for carriage of a complete range of user traffic, including voice, data, and video signals”, ISDN is the Integrated Services Digital Network, PSTN is the Public Switched Telephone Network. How did the telephone system get brought into this? It is a useful abstraction, as the specification includes:

The abstract control model, used for modems controlled through.. serial. Seems like a roundabout way to get serial, but that’s how it was done. And this explains why my computer recognizes these devices as “USB modems”, with /dev/tty.usbmodem device nodes.

When developping on a USB-enabled embedded microcontroller that needs to exchange data with a computer over USB, it is tempting to use a standardized way of communication which is well supported by virtually every operating system. This is why most people choose to implement CDC/PSTN with ACM (did you notice that the Linux kernel driver for /dev/ttyACM0 is named cdc_acm?) because it is the simplest way to exchange raw data.

Direct Line Control would be exchanging data with the modem through an audio class, Abstract Control lets the modem perform hardware analog functions, as instructed to over serial, but this conveniently happens to be useful for non-modem purposes.

In contrast, ttyUSB devices are proprietary UART to USB bridges. FTDI and Prolific have their own. With other vendors you may need to install custom drivers, e.g. SiLabs CP2102 drivers which I mentioned in STM32 Blue Pill ARM development board first look: from Arduino to bare metal programming as being present on some ESP8266 boards and inexpensive USB-to-serial converters. Installing proprietary drivers is a pain, and trying to implement to the spec of a 3rd party proprietary driver runs the risk of incidents like FTDI admits to bricking innocent users’ chips in silent update. Hackaday: Watch that Windows Update: FTDI drivers are killing fake chips. Given this, using the USB CDC ACM instead seems reasonable.

USB-to-serial is cool and all, but how about we take it a step further? The STM32 has three UARTs, so how about a USB to three serial ports? We could call it USB-to-serialx3 or USB to triple serial. Map each of the serials to a virtual serial port over USB using a composite device. Then this blue pill serial adapter would be three times more useful than the garden variety bargain basement singular USB-to-serial, in theory.

Refer to the libopencm3-examples. The stm32-h103/usb_cdcacm example looks instructive, as it “implements a USB CDC-ACM device (aka Virtual Serial Port) to demonstrate the use of the USB device stack”, Atmel’s Migrating from RS-232 to USB Bridge Specification application note (2003) explains how to use the Communications Device Class, Abstract Control Model, to implement a “Virtual COM port”. That’s what we want. For important nuances and gotchas in using these examples, see my earlier experience with developing pill_blink.

Build and flash the cdcacm.bin binary, then connect the target blue pill to your PC over USB. It enumerates correctly:

and shows up in /dev as cu.usbmodemDEM1. Connect to this serial port using GNU Screen:

type and you see the characters you typed echoed back. To exit screen, Ctrl-A, K, Y. Nice example. It could use more LEDs, though. As usual, the example uses the wrong LED for our board: PC12 but the blue pill uses PC13 for the built-in LED. Change it:

Now when the USB cable is plugged in, the PC13 start starts off, then flashes quickly and turns on once connected to the host.

This example initializes each of the three USARTs, and sends incrementing ASCII digits, blinking the LED for each byte. Where are the UARTS, what pins? libopencm3/stm32/f1/gpio.h defines thusly:

PA9/PA10 looks familiar… this is the serial port (USART1) used to reflash the firmware in BOOT0=1 mode. I already have it connected through the BMP, so try to connect through it using screen, specifying the baud rate from the example:

type and the LED blinks and the device echos back. Next up: usart_irq_printf. Change PC13, same screen command, this example continuously prints hello world every 10 ms in the 1 ms sys_tick():

Last usart example, usart_printf, is almost exactly the same except not using IRQs. Many other examples also use the USART.

Now the next step could be to combine the cdcacm and usart examples, building a USB-to-serial bridge from scratch. However, I found it easier to use an existing implementation in the Black Sphere Probe and modify it appropriately. To simplify, removed DFU update mode, removed JTAG/SWD debugging, and only left its USB-to-serial code. Test with a standalone USB-to-serial adapter, wire TXD to PA3, and RXD to PA2: 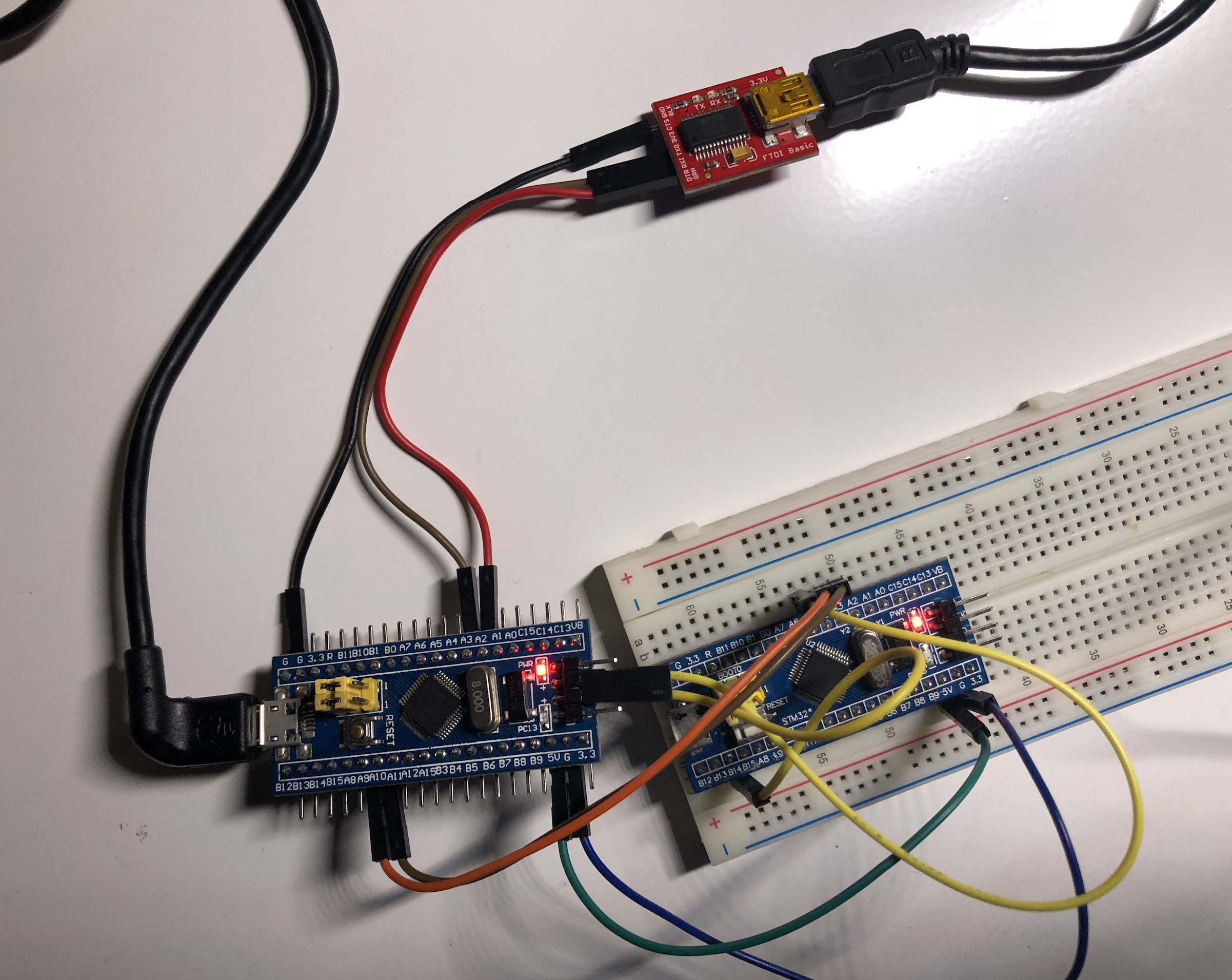 connect to each virtual USB serial port on the PC, type keystrokes and watch the characters flow.

With some work, stripped the firmware of all but the USB-to-serial converter, and enhanced it to support up all three USARTs. The result is what I call pill_serial, available here: